Ever Heard of a "Splatometer"? 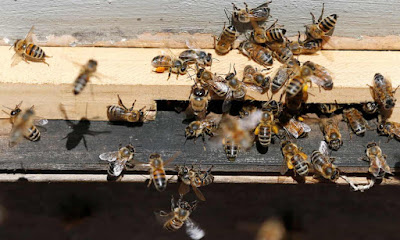 This summer will mark my 55th year of (lawfully) riding motorcycles. I've ridden through a lot of countries, mainly the UK, Western Europe, a bit of northwest Africa, North America (east to west, north to south, rinse, repeat) and other places.  You can't do that without inadvertently eating your fair share of bugs, insects. It used to be that, following a full day of riding, you would be decorated with insect remains from your helmet, on your sunglasses or goggles, your jacket and pants, they were everywhere. They usually made a proper mess of your headlight.

Over the last several years that's changed. The gauntlet is not as it once was. There are fewer insects, a lot fewer.


Two scientific studies of the number of insects splattered by cars have revealed a huge decline in abundance at European sites in two decades.

The research adds to growing evidence of what some scientists have called an “insect apocalypse”, which is threatening a collapse in the natural world that sustains humans and all life on Earth. A third study shows plummeting numbers of aquatic insects in streams.

The survey of insects hitting car windscreens in rural Denmark used data collected every summer from 1997 to 2017 and found an 80% decline in abundance. It also found a parallel decline in the number of swallows and martins, birds that live on insects.

The second survey, in the UK county of Kent in 2019, examined splats in a grid placed over car registration plates, known as a “splatometer”. This revealed 50% fewer impacts than in 2004.

Our warming atmosphere is suspected as the main culprit behind the collapse of insect populations. Light pollution is thought to be another major factor. And, while we don't pay much attention to these bugs, the simple fact is that human civilization can't last without them.

Followed Dave R. down Ganges hill forty years ago and wondered why he was bum dancing on the seat of his bike. Pulled over at the market, and it turns out he managed to get a wasp in the somewhat-too-exposed cheek crack. Multiple stings and many laughs in the Harbour House Beer Parlour. "Bugs in your teeth!" was a frequent refrain at the outset of rides featuring open-faced helmets, or, in the pre-helmet interlude in Marvellous Marin, bare-face jaunts.

Sorry, serious crisis, as I know from the role that pollinators play in the garden, and the clean-up function of wasps and the like. But, y'know, nearly everyone hereabouts drives long stretches in jacked-up Rams, shops for amusement, and builds Surrey-houses for mere couples. Hard to think that we haven't thoroughly screwed the pooch.

Bug sprays are used profusely on orchards and other growing things. There has been a chemical war on insects for at least 75 years.

Danneau, an awesome story. I can picture it vividly. A while back I was seriously carving some corners on the highway to Tofino. I had on a full face helmet. It was one of those situations where you spot a large bug coming, a big black thing. I felt it hit my jacket on the closed-neck collar but I was sure at the speed I was going it was toast. Then, crawling up the visor inside came this big black hornet and, jesus, was it mad. I went from warp speed to zero in nothing flat, unclipped the strap and threw the helmet off my head. That hornet emerged and just flew away.

Such are the joys of motorcycling in our magnificent province, eh? The last few years I haven't "run into" many bugs at all.

You're right about that, Toby. I'm looking into removing the lawn from my back yard and replacing it with ground cover - moss and clover mainly. It seems bees love the clover. It's also drought resistant and almost maintenance-free.

BTW, all, sorry about the posting issues for your comments. I've been inundated with spam lately so I've had to resort to moderation. I hope they'll give up, eventually.

Mound, your moderation is a good step. Once the spammers find your site they will dominate if not blocked.

You're right about that, Toby. I'm looking into removing the lawn from my back yard and replacing it with ground cover - moss and clover

That about all that grows in my yard!
There are still fewer insects .
I miss the bees; the wasps not so much.
Recently a friend drove from the Island to Williams lake.
NO bugs on the windshield! none..

Neighbours in the area are having crop failure in that old orchards are not producing anymore, coincidence?

didn't ride a motorcycle, Mom threatened to break my legs if I did. she meant it. (o.k. five of our friends were killed on them in one year) I have though driven around in vehicles a fair amount in my life time and I'm old. "When we were kids our family car was always loaded with bugs. at each gas station they had to be washed off the wind shield.

We need bugs. we need ants, we need bees and birds. without them we will be out of food. no food, we die. Ants clean up the mess in nature. we need to get rid of pesticides, which kill humans also and help people acquire Parkinson's disease. Even those of us who garden in flower pots can have bug, bee, and bird friendly environments.

The idea of orchards failing in the interior is scary, TB.

It sounds like it's time to put our shoulder into bee keeping. If we're determined to screw up nature - agri-chems/climate change - we had better make some effort to ameliorate the damage we've caused.

e.a.f. - to quote Elvis, "we're caught in a trap." As I've written so many times, it's troubling that, within the span of a single lifetime, we have more than tripled the global population while, at the same time, we've increased longevity and per capita consumption.

How did we do this? The Green Revolution played a huge role. We didn't understand that we were squeezing the Earth as one might squeeze the juice from a lemon. That required ramping up the use of chemical fertilizers, herbicides and pesticides without much regard for how those affected wildlife much less how they accelerated the degradation of farmland. Now the runoff poisons our rivers and lakes with seasonal algae blooms. Our footprint has expanded, forcing nature into retreat. The loss of habitat over the past 40 years has caused non-human species populations, terrestrial and marine, to plummet by more than half. Biodiversity is reeling.