How Is He Not Dead? 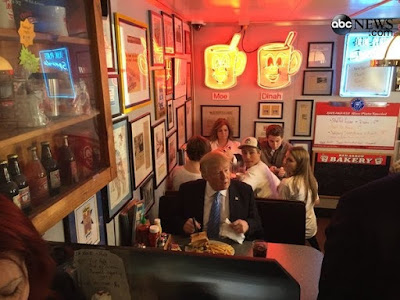 Donald Trump was in Manchester, New Hampshire, on Monday when he swung by the Red Arrow Diner for lunch.

Trump ordered the 'Newton Burger,' a burger topped by mac and cheese between two grilled cheese sandwiches in lieu of a bun. Oh yeah, and an order of fries.  This is what he got: 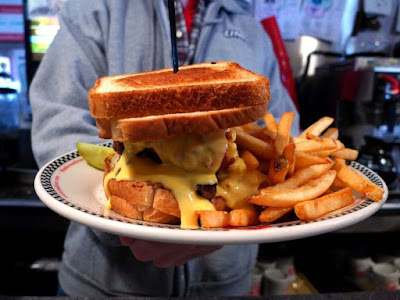 Tell me how president Gutload isn't dead?  A fat burger patty topped with mac and cheese served between two grilled cheese sandwiches plus a generous order of fries. That's a cardiac arrest on a plate. Why won't he do the world a favor and just up and die?
Posted by The Mound of Sound at 3:47 PM

Unfortunately, Mound, his supporters will still be around after he's shuffled off this mortal coil.

given his diet you do wonder why he isn't dead. this post made me laugh. don't know how he keeps on living. perhaps its because he has had great medical care since his birth. there are people who can smoke and drink and live to 90. they are few and far but they are there and it may be that trump is simply a freak of nature. His brain certainly is, although some believe him to have a form of dementia.

Now with any luck perhaps he will die in his sleep, SOON. He is a danger to not only his own country, but others.

I have read opinion pieces suggesting that Trump has altered the political/constitution paradigm of the USA and his ilk will be hanging around long after he's left office.

e.a.f. - I can think of two examples: WC Fields and Winston Churchill. Fortunately they were different than Trump in so many other ways.