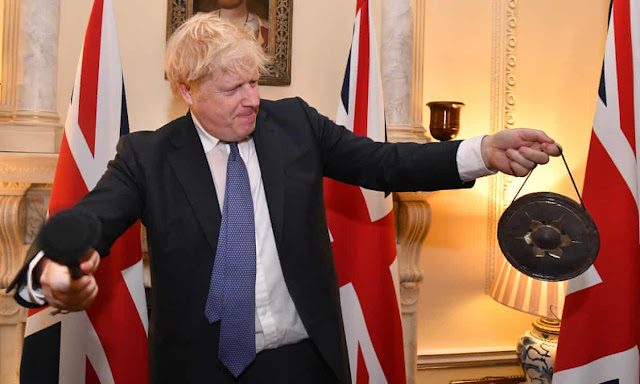 Shots are being fired across bows.

What's the point of walking out if you don't slam a few doors on the way? That seems to be Boris "BoJo" Johnson's outlook.

No sooner had the union jacks been lowered in Brussels and Strasbourg, after 47 years of tortured British membership, than Boris Johnson was preparing to launch the UK into yet another uncompromising battle with the remaining 27 nations of the European Union.

The morning after he had finally achieved his goal of removing the UK from the European club, Downing Street released photographs of the prime minister triumphantly striking a gong on the stroke of 11pm (midnight Brussels time) as this country took its leave. The text from a short speech he made as the clock struck 11 was also released.

As he hit the gong with glee, he was just flexing his muscles for more combat with the UK’s now ex-partners.

There now begins an 11-month transition period during which the prime minister and his government will face the herculean task of securing a future trading and security relationship with the EU. If there is no deal by 31 December, the UK will face a cliff-edge descent into the economic unknown.


The EU is making clear its bottom lines. It insists that the UK must accept alignment with its rules on workers’ rights, the environment and state aid, as the price for a deal (fearing that otherwise the UK will steal a competitive advantage). But Johnson will say that his government will make no such concessions, under any circumstances. There will be no alignment whatsoever.

Downing Street also did nothing to knock down reports that the UK is preparing to impose full customs and border checks on all European goods entering Britain, to try to increase pressure on the bloc to give way in the negotiations, which are due to start next month.


Dominic Raab has been accused of engaging in diplomatic “sabre-rattling” after rejecting legislative alignment with Brussels and dismissing claims by Michel Barnier that the Brexit agreement makes customs checks in the Irish Sea “indispensable” .

The UK foreign secretary said following EU rules after 2021 “just ain’t happening” and insisted it was wrong for the EU’s senior negotiator to claim that goods entering Northern Ireland and Great Britain would be subject to extra paperwork once Britain leaves the post-Brexit transition period.

Europe lobs a few grenades of its own.

The Euros are wasting no time responding where they sense BoJo is most vulnerable - Scotland.


Donald Tusk, the former president of the European council, has said there would be widespread enthusiasm in the EU if Scotland applied to rejoin after independence.

In remarks that will boost Nicola Sturgeon’s campaign for a second referendum, Tusk told the BBC he had great sympathy with the desire of many Scots to rejoin the EU after Brexit.

“I want to stop myself from saying something too blunt. Sometimes I feel I am Scots. I’m very Scottish now, especially after Brexit,” he told BBC One’s The Andrew Marr Show.

“Emotionally, I have no doubt everyone would be enthusiastic here, in Brussels and more widely in Europe, but still we have treaties and formalities. But if you ask me about our emotions, there’s a genuine feeling. You will witness only, I think, empathy.

Ireland wants BoJo to grow up.


A clash in thinking over regulatory alignment between the UK and the EU is already shaping up to be a central sticking point, with the EU insisting on alignment in exchange for access to the single market and the UK threatening to throw up a customs wall around Britain.

[Irish prime minister, Leo] Varadkar called on the UK to tone down the “nationalist rhetoric” and said negotiations would get off to a better start if they did “not repeat some of the errors that were made in the last two and a half years”.

“Let’s not set such rigid red lines that makes it hard to come to an agreement and let’s tone down the kind of nationalistic rhetoric,” he told the BBC.

He said reports that British ambassadors were being instructed to sit away from EU ambassadors at international events was “silly”.

“I think it just comes across as a little bit petty. It’s kind of when you are in primary school and in secondary school and you get worried about who you can sit beside in class.

Childish, to be sure, but there's a far darker side to England's Brexiteers. 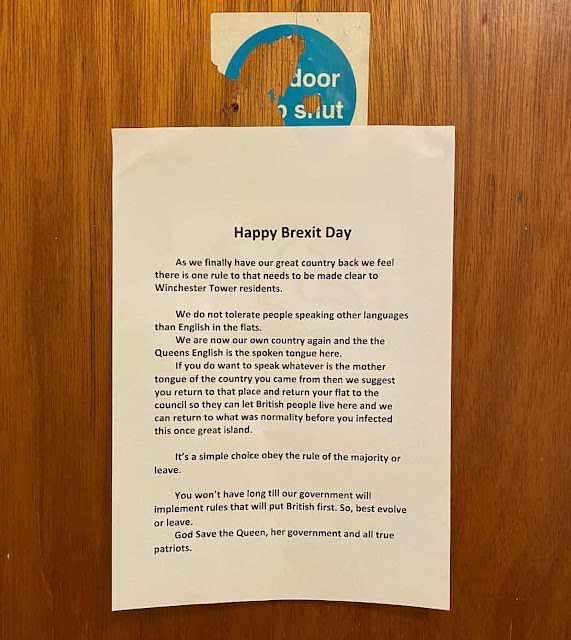 The EU are backing Spains claim to Gibralter, that will be interesting.

The UK is following the US example of waving the flag for a deteriating country.
I have a feeling that the Brexit honeymoon will be short when workers rights are sacrificed partularly when negotiating with Sam Slick the american trader.

Albertan's should watch what happens in Europe whilst they cry for independence.

Pretty amazing xenophobic rant in that Happy Brexit Day notice in Winchester Flats. Reads like a tweet from the delusionally put-upon white person racist "patriot" nuts that Anti Racism Canada publishes to show us what hatred is ... the Faith Goldy, Proud Boys, Soldiers of Odin brigades of welcoming white supremacist supposed Queen-loving patriot Canucks afraid their jobs might be taken by better educated black, brown and Asian citizens and legal immigrants. Not so sure that it's all that far from the views of the more gruntworthy gutter followers of the CPC, either.

Quebec rebelled against the English and Americans running the big business side of their province in the English language and treating them like second class citizens who had to learn English to advance, if one recalls clearly what the Levesque rebellion was really about. The pulp mills dotted around, the manufacturing in Montreal typified by Pratt & Whitney, and CP ran in English.

Remember the exodus when people realized the gravy train for Anglos (who couldn't be bothered or weren't interested in learning French) in business was over back in 1977? I do -- people in the company I worked for got out of Montreal and Trois Rivieres for Toronto and points West. Cowards.

Scotland will eventually throw off the shackles of the English as well. It's a domineering tongue spread on Imperial ways of faux superiority, lovingly copied by America as Britain faded. Why bother learning a "foreign" language when you can force the locals to learn English to earn a living or fill corporate positions? Look at Injuh. Where a form of English is still extant, second only to Hindi in usage, 70 years after the Brits left.

Johnson will now preside over a distinctly third rate nation with a falling standard of living. Pre-Brexit preparations? Essentially zero, because these Tories are trainees-in-the-classics-bigheads running things - they couldn't care less about industry, as their auto industry found out.

No other country feels compelled to give Johnson and his cronies a special deal; that delusion exists only in his head. His country hasn't much to offer others in trade or resources, and memories of being lorded over by the English in times past are long and deep. They'll be made fools of and be laughed at by the EU, that's a certainty. And Trump won't give them anything for nothing. He might even start charging them for all the Yankee military bases on UK soil instead, like he does South Korea. Yet all Boris feels is unmitigated joy at having pulled off the scam with his FPTP election win. Bright he is not.

The UK will become the second Greece, its wealthy, whose only loyalty is to their good lives, will emigrate much as their counterparts abandoned Greece, taking their loot with them. The financial sector go-getters in London will leave for Frankfurt and oh, the humility of it all, have to learn German. Johnson and his friends will flog off Blighty's heritage for pennies on the pound, leaving a hollow shell owned by foreigners eager to squeeze blood from a stone.

That'll eventually rattle the bigots of Winchester Flats, when they realize they've been sold down the river by their, as they say in England, "betters". Delicious irony.

The country of my birth my family left 60 years ago has gone to the dogs, convinced it's special by nothing more than a feeling and tales of past glory. It sure was ladled on thick when I was a child in school.

Britain, or at least its Conservatives, were never willing to grasp the dynamics of leaving the EU in a trade context. Canada may have gotten a sweetheart deal but I think that was premised on improved access to the greater North American economy.

BoJo imagines the UK with the same deal, as though there are no repercussions from bailing out on a half-century relationship. Now, perhaps more than ever, Brussels needs to bolster their common market and strengthen the union. Rewarding the UK for leaving will hardly encourage the remaining EU members to stay, especially if they perceive they can get a better deal by leaving. Far better to accept a few wounds and a bit of bleeding in a scrap with Whitehall, especially if they can get their own back and more on the Brits.

Farage & Co. have already shorted their bets. There may be large-scale losses but that allows small-scale windfalls, just as the Americans experienced in 2007-2008. "Credit default swaps" anyone?

I've been hesitant to accept the 'diminished Britain' scenario until I watched the behaviour of BoJo and Raab in the immediate aftermath. Theirs is an empty triumphalism. Threatening to go "hard Brexit" on Europe when they're just beginning the 11th month transition is as profoundly stupid as the spectacle of Boris banging on that gong.

Payback is indeed a bitch.