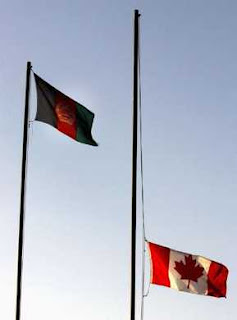 I was mildly surprised that Harper got into the Afghanistan issue in the midst of this election cycle. He'd already neutralized the Libs on it and it was hard to see that he had much to gain by talking about the supposed, 2011 pullout of Canadian forces.

Will we have our combat troops out in 2011? I sure as hell hope so. Will we have contributed to a winning effort to create a viable Afghanistan? Not hardly.

We aren't there to win, never were. At best we've been babysitting an unresolved civil war.

I was doing some catchup reading this morning when I stumbled across this little gem in the September 8th edition of The New Yorker. It's from an article about Iraq and David Petraeus by Steve Coll entitled "The General's Dilemma."

Although not directed at Afghanistan, I was struck at how applicable were the comments attributed to former National Security Council senior director, Steven Simon:

...Unless the United States can craft a much more successful effort, reinforced by international diplomacy, to strengthen Iraq's central government, "we're midwifing the dissolution of the country," Steven Simon, a senior director of the National Security Council during the Clinton administration said.

He continued, "There are two things that every successful state in the Middle East has had to do to insure its viability. One is to stamp out warlordism, and the other is to suppress tribalism. Where that has not happened, you find unsuccessful states, like Yemen, for example - and now Iraq... We're creating dependencies in a decentralized state that will be at risk when we leave."

Stamp out warlordism? Suppress tribalism? In Afghanistan we handed the keys to the warlords. Thugs like Dostum run around Kabul shooting up the place and then standing defiant, surrounded by their militias, against the police. The warlords (guess what? they're Islamists too)dominate the legislature and ram through laws granting themselves amnesty for their barbarous crimes.

Without the backing of the warlords, Karzai would be hanging from a Kabul lamp post by now.

Tribalism? Afghanistan has never been more than a jury-rigged amalgam of tribalism. Do you think we've united the Uzbeks and Tajiks? Have we forged real bonds among the Pashtun, Hazara and Turkmen? Get real. We haven't even addressed that little terminal affliction.

Afghanistan is so hopelessly screwed up that it's far too late now to even hope for a successful outcome. Unfortunately we have another couple of years to keep feeding our soldiers into this gaping maw before we can get them out.

The one thing I want to ensure is that no one blames our soldiers for this failure. They've been set up, thrown into an unwinnable battle, from Day One. I expect five or ten years down the road there'll be a lot of justifiable bitterness among these veterans. We really ought to have stood up for them when it mattered. They didn't fail, we failed them.
Posted by The Mound of Sound at 11:55 AM

Canadian soldiers have always gone dutifully where their government has asked them to go. We went in in response to 9/11. George left NATO hanging and went off to steal oil, create 5 million refugees and destroy a country. We owe nobody nuthin' and our troops, grand men and women all, owing apology or regret to no one.