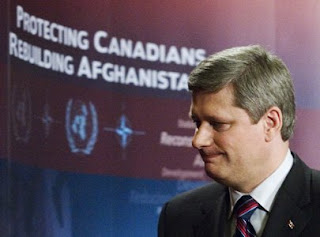 Now, let me get this right. Steve wants Canadians to give him a majority so that the opposition parties don't sabotage his government's ability to deal with the coming economic crisis.
Sabotage? This, of course, coming from the guy who ensured that every member of his caucus had a manual on how to subvert parliament, especially parliamentary committees. A manual. A how-to-sabotage-government handbook. And this arrogant clown, without offering the slightest evidence, claims the opposition parties would do what only his party has done to date. What a sphincter!
So, no evidence of sabotage plans beyond Steve's word and he's shown us all we need to know about what his word is worth. He's not quite John McCain yet but he could get there.
But, better yet, why doesn't Steve tell us what his government plans to do about this looming economic crisis? He's had the reins of power these past two years, he's got all the experts working for him. He ought to be coming to the voters with a concrete plan. So where is it?
Nowhere to be seen, that's where it is. If a plan exists, he's not going to share it with the electorate. But, if he wins, he'll puff himself up and claim he's got a mandate to effect measures he wouldn't disclose to the voters during the campaign.
A sphincter, the guy's a sphincter.
Posted by The Mound of Sound at 11:31 AM

Maybe doing nothing is the best plan. I know one thing for sure...implimenting a tax on everything is not the way to go.
billg

Another Con-servative sphincter lying about a "tax on everything"... They are obviously not very bright... A tax shift is not the same as a new tax. Juggling around money already there is NOT creating another tax burden. The average Canadian will save way more from the pure income tax cut, and how much they pay for their carbon use will only be based on that: use. Use less, take more public transit, or pool with others. Green up your home - get another big tax credit.

As far as lunacy - idiotic actually - what is Harper trying to do by increasing Canadians' debt load? An INCENTIVE to take on a mortgage at a time when the real estate market is tanking... Yeah, that's f'n brilliant.

That wasnt what I 'tried' to say.
No one knows for sure what to do now...and if anyone says they know the best method to curb the oncoming US financial tide they are flat out lying...including Mr Harper. Its speculation at best. I had a good friend who works in NY as a corporate tax lawyer explain it to me today. He said it's kind of like the Republicans are the parents who run up thier Visa's and credit lines to by new cars and boats, and, the US citizens are the children who when they see their parents spend like crazy go get themselves a Visa and do the same thing, and, the bailout was a huge mistake because it only delays the inevitable. He also thought Canada's Oil commodity's could sheltar Canada from alot of the fallout. Didnt mean to sound like a Con talking ad, but, even PET couldnt sell a Carbon Tax right now.
billg

The problem I have with your logic, Bill, is that you can't explain when the conditions would be satisfactory to implement carbon tariffs/taxing/pricing. What are the requisite conditions and just how long do you think we ought to wait for that to arrive?
As for Harper and the looming economic downturn, he has (as I said) had the reins of power for two years and it's inexcusable if he doesn't have in place plans to deal with a severe downturn. Indeed he ought to have had that very contingency in mind when he defunded the government of revenues via GST cuts.
Sorry Bill but you don't seem willing to hold this guy accountable for anything - whether that be his insistence on extending the Afghan mission, gagging the Armed Forces, gagging our environmental scientists, secrecy, totally autocratic and unaccountable rule, defunding the goverenment, the lack of a coherent plan to deal with economic downturn - anything.

When it comes to Harper you've set your sights so low you're at risk of shooting yourself right in the foot.