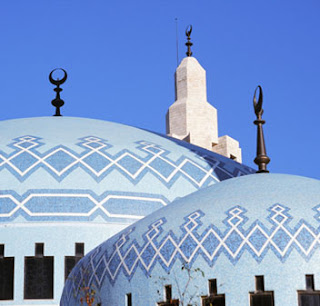 For the past seven years we've been playing a furious game of Whack-a-Mole with radical Islam. Even by conventional terms - tonnage of weapons dropped, etc. - this has been a major war.

What lies in the future may depend on who gets elected in the US in November. One guy looks pretty keen on keeping these wars ticking over and maybe adding one, perhaps even two, while stirring the embers of another Cold War to boot. The other guy - who knows? He doesn't appear as bellicose but there are no guarantees.

We're at the threshold of an era of multi-dimensional, global change. We've launched a massive expansion of Eastern economies, particularly the giant states of China and India.

There are a lot of problems looming that will eclipse Islamic fundamentalism. There's anthropogenic global warming and all the associated climate change issues - droughts, floods, storms; species extinctions and migrations (ours too); desertification; freshwater exhaustion; land, air and water pollution; the spread of insects and diseases. Then in an increasingly busy world we're going to have to tackle frictions over resources caused by the exhaustion of renewables and depletion of non-renewables. Add to that all the related problems associated with overpopulation and we've got a heaping plateful of existential challenges even without looking for wars to wage.

I don't think we can afford wars any longer, at least not like we used to in the 20th Century. They suck up too many resources and deplete the energies we need to deal with everything else that's knocking on our door at the moment. They're an unacceptable distraction.

Take Islamist terrorism, for example. That's "Islamist" as in radical Islam as in Wahabism. As the Muslim world goes, the Islamist movement is relatively small but we've done an awfully poor job at combating it.

Muslim kids go in the front door of these Madrassas and out the back door all fired up and ready for the Islamist training camps. Our approach has been to bomb'em into extinction once they've gone through this process. However to succeed in our approach, we have to wipe them out faster than they can come through the religious indoctrination level and we're not even coming close on that score.

If the Islamist movement has a fundamental vulnerability it lies in its inability to sustain itself. It needs money and the active support of sympathizers, most of whom are not Islamists. We need to sort out what drives ordinary, rank and file Muslims, the "Arab Street," to support these extremists.

I think there's no end of reasons for the ongoing support of this extremism. A very powerful one is historical. The West has been powerfully meddling in Arab affairs for more than a century - shaping the place to suit our interests with little regard for theirs. We bundled together places like Pakistan and Iraq and Syria out of the spoils we picked up from the collapse of the Ottoman Empire following WWI. We even parcelled the Kurds out among at least six nations, sort of like sending the orphan kids off to live with various, distant relatives. In the process, we have persistently lied to and betrayed these people. We have persistently manipulated them to suit our purposes.

We've been astonishingly racist toward Arabs. We've treated them as though because they're Arabs or Muslims or something they don't need or aspire to the same things we insist upon - little things like human rights and democracy. Think I'm kidding? Look at the state of human rights and democratic movements in the West's two closest Arab states - Egypt and Saudi Arabia. Do you think it's just oversight that we constantly focus on the anti-democratic repression in Muslim states we don't like - places like Iran and Syria - but seem not to mind when the oppressors are on our side?

We've contributed to a state of affairs in which radical Islam is the only vehicle of change remaining to so many of these Arab peoples. Okay, so we've done our bit to narrow their options down to one. Why are we surprised when they're drawn to it?

The Islamists - whether you call them Hezbollah, al-Qaeda or any of the lesser groups - get a lot of their support because they stand defiant of the very order that oppresses these people. It's more a "my enemy's enemy" sort of thing than a genuine alliance of immersed interests. They know the Islamists aren't working for democratic change but they're also the only bunch that's taking a swing at their common foes.

For a while we gave the Arab Street reason to believe we were coming to spread democracy through their region. Now that's something we've promised them before and they're painfully aware of our past betrayals but when they did get a chance to exercise democracy we rushed right in to shut it down.

The Palestinians elected Hamas because they saw Fatah as atrophied, hopelessly corrupt and willing to sell them out to Israel and the US. They saw in Hamas their only real hope for change. And how did we react? We pretended like they didn't vote, as though they didn't choose. We acted as though Fatah had won. We even channeled money and arms to Fatah to stage a coup to oust Hamas.

Lebanese elections ended with Hezbollah winning a number of seats. We were outraged, it was unacceptable!

But wait a minute. Weren't many of Israel's early leaders key figures in its own, nationalist terrorist movements? Some of them were butchers, real murderers. Did that stop us from dealing with them? No, of course not. Now you may not have that little inconsistency in the forefront of your mind but you can bet the farm that it's always in the minds of the Arab Street.

We Westerners celebrate all the struggles our ancestors went through to create the democracies we supposedly cherish today. Why do we find those same aspirations so outrageous when they involve the Arab peoples? One reason is because we've been groomed to be blind to it. We're told, again and again, that all the Muslim people want to do is conquer the world - our world, that is - for Islam, for the Prophet. We're told they're on a suicide mission from their God to wipe us out because they can't stand our Western societies, our freedom, our very democracies. Okay, anyone believing that, line up on the right under the sign that reads "Morons."

Those arguments deny these people their essential humanity. This thinking presents Arabs as less than human. No, no, they don't want to raise families, send their kids to school, have a few nice things and live in peace. No, Johnny, only human beings want those things, not Arabs. Sure some of them live in concentration - er, "refugee" camps, but that's because they're okay with it.

If there is a Christian God, what must he think of his adherents who act this way?

But I digress. If we want to get Arab terrorism under control, we have to repair the Arab Street. We have to accept that the only real leadership they have - at the moment - is in the radical movement, just as the Israeli leadership was birthed.

Then, and here's the hard part, we have to believe in democracy and place our faith in its power. Yes, Arab peoples may begin electing outfits like Hamas and Hezbollah and, yes, the early years of their democratic experiment are apt to be uneven, at times even turbulent, but we have to believe that democracy will defeat extremism because it removes the common bond between Islamist extremists and the Arab Street without which the fundamentalists wither and die.

It's time to do some major arm twisting in Cairo and Riyadh. It's time we threw our support behind democracy movements in Egypt and Saudi Arabia - economic and political support. If we can make change happen there, we really have the basis of spreading reform through the rest of the Middle East - by example, not by gunfire.

Or let's just keep doing what's worked out so wonderfully for us these past seven years. Bomb, bomb, bomb; bomb, bomb Iran.
Posted by The Mound of Sound at 8:15 AM