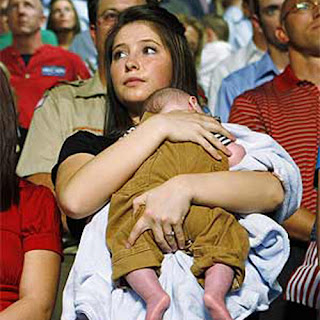 This one is almost too good to be true. The Times of London speculates that Sarah Palin may be gearing up to give the McCain campaign a popularity boost by marrying off her pregnant daughter, Bristol, to her high-school dropout boyfriend, Levi, just days before the November 4th vote.

The paper claims the McCain camp sees this as a blessing to be milked for everything it's worth:

"It would be fantastic," said a McCain insider. "You would have every TV camera there. The entire country would be watching. It would shut down the race for a week."

Who would've imagined that a 17-year old's uterus could play a pivotal role in a US presidential election?
Posted by The Mound of Sound at 8:49 AM

Just plain low-life and as discusting as discusting gets. There isn't any other way to discribe this. And, by the way...all in the name of God makes it even worse. Talk about make your stomach crawl. A. Morris