A Gaffe Big Enough To Drive a Truck Through 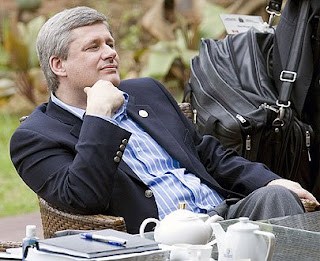 Harper is right, in part. We're not the United States, not that he can claim a lot of credit for that. Harper's outspoken support for deep integration with the United States is on record and it speaks for itself.

Here's one fundamental of the Canadian economy that's anything but sound - our unhealthy reliance on trade with the United States. In trade, we've been putting almost all of our eggs in one basket, the one with all the stars and stripes painted on it.

The rest of the world, those countries that Harper has so often shown a cold shoulder? You don't find Canada enjoying a lot of balance of trade surpluses with them. In fact we're running a serious balance of trade deficit beyond the U.S.

So Harp needs a sharp one up alongside his goofy head. Our hull may not be leaking but when you're the rowboat tied fast to the Titanic, you've got a problem, one that you need to acknowledge and address and resolve.

The guy at the wheel of the Tory clown car doesn't want to talk about this. Harper is afraid that simply talking about what's in store for us could upset his plans when he's so close to an election win. Shouldn't we be afraid of a guy who acts like this?

So, Mister Dion, it's time to act like the leader of the Liberal Party. The Globe reports that a group of Toronto Libs are urging Dion to appoint a panel of prominent Liberals to, "...to study the situation and suggest ways Canadians can keep their life savings and deal with the Wall Street crisis."
They're touting names like Paul Martin, Frank McKenna, John Manley and Don Johnston - men whose financial talents are unheard of in the Tory ranks.

“We believe this task force idea would help Dion recover at the 11th hour, because at the very least, it would remind Canadians of the stellar Chrétien/Martin record on the economy,” one of the Toronto Liberals said. “Desperate times call for desperate measures, perhaps. This is not a desperate measure but a smart one.”

Harper has taken his stand. The economy is sound, nothing to see here, move on. It's a position that defies reality and would leave Canadians at severe risk to an American meltdown. Harper hasn't given Mr. Dion many opportunities as good as this and Mr. Dion can't afford to pass on this one.
Posted by The Mound of Sound at 9:48 PM

It's almost a reflex of conservatives everywhere to repeat Hoover. It is in their blood? This isn't the first time Harper's said this either.

Ontario Liberal Finance Minister Dwight Duncan said yesterday: "One of the things that I think would be a mistake right now is massive shifts in tax burden at a time when there's uncertainty."
Sounds like even he doesn't have faith in Dion and the Ontario Liberals are endorsing Harper.

How exactly do you infer that?

Just by taking that one quote, I could say that he's promoting the NDP, via saying Mister Duncan is against tax cuts for the rich (which shifts the burden downward). But at the same time, the Liberals have promised tax cuts for corporations, so how exactly Duncan is criticizing his federal counterparts is beyond me.

Troy, it sounds as though Scott is doing his best to torture logic and get this off-topic. Harper said the economy is strong and went on to imply that we're somehow in a bubble, immune to the meltdown in the nation to which he has seen us so directly tied.

Scott obviously has no cogent answer to get Harpo off that hook so he resorts to the time honoured uber-right tactic of bait and switch.

I'm beginning to think that Harper knew, in advance, that there was a huge meltdown about to happen in the U.S. & that is why he called an election before it begins making heavy inroads here. Because we will have our own meltdown.

The U.S. has known for a long time that the markets were in trouble & so does Harper. I'm sure there's "shared" info on this between Harp & Bush & has been ongoing for awhile.

It was stated, numerous times, when Harp started hinting election, "what's the rush"? "What does he know that we don't."?

Well it seems we have our answer.

Your forgetting that Manley, Johnston, McKenna, Tobin and Rock all fled your sinking ship two years ago...and wont go back until the "goofys" get off the boat. You can dismiss Ontario's finance minister's remarks all you want but either (mistake or intentional) its not good for Dion.
I'm surprised at you. You know better then anyone that consumer confidence is the key to market downturns..and yet you want the PM to come out and say everything's not ok? As of today Canada's surplus is 9 billion dollars..that's B as in billion. Contrary to every Liberal's wish we are in pretty good shape. We are a commodity based economy and should handle the US fall out with some pain but not as much as the US...if we stay calm and keep doing what were doing...not engage in taxing everything that moves. We are ok and we should be ok, and alot of the praise should go to Paul Martin...he's the one who twice refused the banks requests to follow the US subprime lead. The problem is, and I'm not sure why you refuse to admit it, is that Canadians see Mr Dion and Mr Layton as one in the same...a removed socialist who has no clue how economy's work or where jobs come from. billg

Bill, you're missing a couple of points. One is that this is a Toronto Lib initiative, not Dion's. In other words there's probably a good bit of Bay Street behind it.

Yes, consumer confidence is a key factor in market meltdowns - as in "a" - but I don't think that Canadians are nearly as stupid as you suggest. They know that our country's fortunes are firmly tied to America's. Bill, we go to school and we read newspapers. This is no secret.

How are we going to keep it from the Canadian people that Canada's balance of trade surplus, ever crucial to an exporting nation, goes negative without the United States?

Do you have such low regard for your countrymen that you think if we just pat them on the head, tell them everything's fine, hand them something shiny, they'll think there's no cause for concern?

No one, Bill, is suggesting we'll tank as seems to be America's fate. I'm certainly not so I can't grasp where you're getting that from.

For example, Bill. The US housing bubble drove a lot of those big trade surpluses. It created an enormous US market for softwood and other products they needed to build far more houses than their market could sustain. Now they've got a housing glut, Bill, and are looking at solutions such as demolishing the least valuable stock to bring supply back into some sort of balance with legitimate demand.

We're already seeing the impact of the American meltdown on world oil prices. The more they fall, the less profitable our Tar Sands.

I'm not saying Harper has to fall to his knees and yell "we're ruined." We're not. Yet we need to begin rethinking our attitude to trade with the world beyond the United States including one particular nation that Harper routinely snubs and another he just plain ignores.

We have to rethink the deep integration initiative and recognize there's a lot more to Canada's future than geographical proximity.

And Bill, while you're singing the praises of Paul Martin, he's one of the key figures mentioned in this proposal.

So, Bill, I think it's quite frankly insulting to Canadians to suggest they can't bear an honest discussion of these issues. I think it would be as likely to restore confidence as it would to weaken it.

We can all see what's happening Bill. We've got TVs now, even out here at the far end of the country.

Some other things you've also missed, Bill. This isn't isolated to the United States but extends, in varying degrees, around the world. Virtually all nations' banks wound up with some bad American paper. Others, such as Britain, indulged very heavily in the same fiscal madness as Americans. British banks have failed and their hyperinflated housing market appears to be heading the same was as America's.

If American consumerism has driven the world economy (where do you think China sells all those rubber duckies?), the retraction will be unavoidable in their markets too.

Put another way, Bill, it's not just our dominant trading partner that need concern us. It's also our minor trading partners and the potential markets we might focus on in better times.

Finally, Bill, let's return to your "see no evil, hear no evil" concepts about Canadian strength. If you haven't read the Merrill Lynch Canada report on the fiscal state of Canadian households, get your hands on it.

MLC has produced a study warning that Canada is indeed next in line for a housing bubble collapse and credit crunch all of our own. Once you have some evidence to refute their numbers and findings, be sure to get back to me.

You see Bill, when the average first-time homebuying couple in Vancouver have to allocate 75-78% of their combined take home pay to their house purchase, something is seriously out of whack right here in the homeland my friend.

The fundamentals for a Canadian economic stumble are gathering, Bill. Are you sure your "nothing to see here, move along" approach is valid?