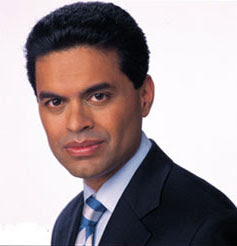 "Will someone please put Sarah Palin out of her agony? Is it too much to ask that she come to realize that she wants, in that wonderful phrase in American politics, "to spend more time with her family"? Having stayed in purdah for weeks, she finally agreed to a third interview. CBS's Katie Couric questioned her in her trademark sympathetic style. It didn't help. When asked how living in the state closest to Russia gave her foreign-policy experience, Palin responded thus:

"'It's very important when you consider even national-security issues with Russia as Putin rears his head and comes into the airspace of the United States of America. Where--where do they go? It's Alaska. It's just right over the border. It is from Alaska that we send those out to make sure that an eye is being kept on this very powerful nation, Russia, because they are right there. They are right next to--to our state.'

"There is, of course, the sheer absurdity of the premise. Two weeks ago I flew to Tokyo, crossing over the North Pole. Does that make me an expert on Santa Claus? (Thanks, Jon Stewart.) But even beyond that, read the rest of her response. "It is from Alaska that we send out those ..." What does this mean? This is not an isolated example. Palin has been given a set of talking points by campaign advisers, simple ideological mantras that she repeats and repeats as long as she can. ("We mustn't blink.") But if forced off those rehearsed lines, what she has to say is often, quite frankly, gibberish."

Zakaria focuses on this Palin answer in response to a Couric question, "designed to see if Palin understood that the problem in this crisis is that credit and liquidity in the financial system has dried up."

PALIN: "That's why I say I, like every American I'm speaking with, were ill about this position that we have been put in where it is the taxpayers looking to bail out. But ultimately, what the bailout does is help those who are concerned about the health-care reform that is needed to help shore up our economy, helping the--it's got to be all about job creation, too, shoring up our economy and putting it back on the right track. So health-care reform and reducing taxes and reining in spending has got to accompany tax reductions and tax relief for Americans. And trade, we've got to see trade as opportunity, not as a competitive, scary thing. But one in five jobs being created in the trade sector today, we've got to look at that as more opportunity. All those things under the umbrella of job creation. This bailout is a part of that."

Nothing could make it plainer that Sarah Palin has no business standing as a potential "next in line" to the presidency of the United States. She is vacuous - an empty vessel from the neck up. She is Dan Quayle minus the intellect. The McCain people have been trying to groom her for weeks and yet she still has no grasp of even the most major issues of the day.

Okay, fairness demands that I acknowledge Fareed Zakaria is an elitist. Yes, he is well educated. Yes, he is highly experienced and very knowledgeable. Yes these are the qualities that fuel the righteous indignation of you fundamentalist nutjobs. There you go. Now, bite me.
Posted by The Mound of Sound at 8:38 AM

Let's pretend for a second that Sarah Palin is not "experienced" enough to be V.P.

If that is indeed true, than how does Barack Obama have enough "experience"?

One has executive experience.

One has no experience at all.

You figure it out.

Anonymous - LOL, never mind "experience" -- basic intelligence is the issue. And SaWah has been weighed, measured and found extremely wanting.

My God, anon, are you that thick or are you delusional? Go back and read Palin's responses to Couric's questions. I'm sorry, chum, but this isn't just about experience but intellect and knowledge. She can't even craft an intelligible narrative on critical issues. Go back and read that again. There's all the answer you need if you're really looking for an answer.

Palin's answers to Couric, or Obama denying the "surge" in Iraq is such a success that the USA only lost 5 soldiers to enemy action last month, all the while Chicago lost 55.

How about Obama voting "present" over 175 times as Senator?

Palin might not be ready for Prime Time because she has failed to ever be there, but Obama has failed miserably in his time in "Prime Time".

A complete utter failure is the best you can say about Obama.

Anon, do you really think "the surge" is the real cause of the drop in violence in Iraq? Are you that naive, that ill-informed? I suppose to a very simplistic mind your reasoning holds some credence. Then again, it would take a very simplistic mind to depict Obama as a miserable failure. Let's see - did he have to go through five schools to get a bachelor's degree in (giggle) journalism? Or was he a full, academic scholarship student who became president of the Harvard Law Review? I'll have to get back to you on that one. Fool.

Oh, so if your a "academic student", that is enough to be President?

Sarah Palin, like it or not, is the governor of a state, kind of like that Bill Clinton guy. Remember him. Or is it the fact he had a "penis" that made him "presidential".

I admit, Sarah Palin might not be ready for Prime Time, but comparing Obama's executive experience to Palin's is a bit rich.

Barack Obama is the least experienced Canditate in the last 100 years.

The USA is not like Canada. In Canada , you can be a "Stephane Dion" type character and be considered a "leader".

Stephane Dion couldn't even be elected for mayor in an American town, let alone the President.


And BTW, the "surge" is the reason why violence is down in Iraq.

Not because of left wing fools like yourself who wanted the USA to bail out on the Iraqi people, because again, Liberals only care about human rights for themselves, not for anyone else.

Iraq is a perfect example.

Yes, anon, I am calling you a fool because that's what you are - a naive, unquestioning, gullible fool.
You credit "the surge" with the decline in violence in Iraq. Did it ever dawn on you that Sadr's Mahdi Army remains intact and waiting for its moment as is Maliki's Badr militia, now operating in the guise of the Iraqi security services. Are you at all curious about the state of the Awakening movement of Sunni insurgents, their current strength and dispositions and what they see in store for their future both vis a vis the Americans and the Shiite Iraqis? Have you the slightest grasp on the KAR and the volatile problem of Kirkuk?

You reduce these situations to imbecilic simplicity and puke out sheer nonsense in the result. That is what we expect from fools.

And, since you ask, no, I've never said that high academic achievement is "enough" to be president, nothing of the sort. Only an utter fool would read that into what I wrote. Yes, I remember Bill Clinton quite well. I'm sure the American people would jump at the chance if they could have him as their president again. And yes, Bill Clinton was a Rhodes Scholar, not an academic slouch like Sarah Palin.

Your blend of ignorance and sheer stupidity is breathtaking. It's no wonder you fall for all this simplistic nonsense you keep repeating. Yes, I have no hesitation in calling you a fool.

The more I read about Sarah Palin, the more worried I become. You might like to check out Naomi Wolf’s latest article , entitled The Battle Plan II Sarah Evita Palin the Muse of the Coming Police State, found at http://www.sott.net/articles/show/166435-The-Battle-Plan-II-
Sarah-Evita-Palin-the-Muse-of-the-Coming-Police-State which is truly frightening reading.
Thanks for your post.