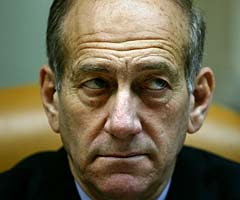 I'm no historian when it comes to Israeli politics so bear with me. Remarks being attributed to outgoing Israeli prime minister Ehud Olmert reminded me of an article I read not too long ago that claimed outgoing Israeli leaders tell truths they were never willing to embrace while they held power.

The main truth is the one coming from Olmert today, namely that Israel will never achieve peace with the Palestinians and Syria until it returns the lands it seized in 1967. From The Globe & Mail:

"In an interview published in the Yedioth Ahronoth newspaper yesterday, a week after his formal resignation, Mr. Olmert said that Israelis need to make a "supremely difficult" decision about whether or not they really want to have peace with their neighbours. If the answer is yes, he said, Israel will have to withdraw its soldiers and settlers from the Golan Heights and nearly all of the West Bank, including East Jerusalem."

What's radical about that? All Olmert is stating is what everybody knows. The profound part is that no Israeli leader has been willing to do what it takes.

Don't go spinning off into the usual uber-right diversions about Hamas or Hezbollah. Olmert, like his predecessors, didn't qualify his opinions with that nonsense because he knows that gets his country nowhere. That's Fox News drivel. Give Olmert and his Israeli predecessors a bit of credit. Maybe, just maybe, they understand their region's reality better than Sean Hannity and the rest of the rightwing rabble.
Posted by The Mound of Sound at 8:26 AM

Vague hints and empty statements about returning land for peace are a frequently employed device in the Israeli political toolbox for softening western reactions to,or providing a distraction from, another round of ethnic cleansing / colonization / defacto annexation in the West Bank. Actions, or in Olmert's case past actions, speak much louder than words.