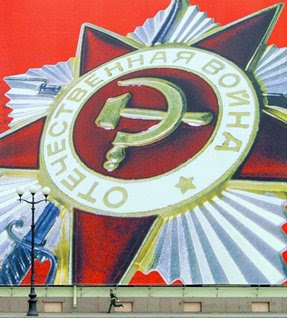 The insanely bellicose Bush Doctrine continues to stoke the world's arms races (in case you didn't know, there are several underway).

Russian president Medvedev says his country will have a "guaranteed nuclear deterrent system" up and running by 2020. BBC reports that Medvedev is calling for a new fleet of nuke subs to go along with the missile shield programme.

He said it was necessary to build "new types of armaments", and to "achieve dominance in airspace", according to quotes carried by the Itar-Tass news agency.

Before he stepped down to become prime minister, Vlad Putin, announced Russia would develop its own new generation of nuclear weapons and an advanced missile designed to defeat the latest American anti-missile systems.

Can somebody tell me why we're starting this Cold War thing again? Just who is getting precisely what out of this? Or is it just bloodyminded idiocy?
Posted by The Mound of Sound at 10:30 AM

Or maybe Bush & Co. saw this coming years ago and pushed ahead with the missile shield as a result?

Sorry Anon, that's just plain fantasy. Don't take the Russian race to rearm in isolation. Take a look at all the arms races underway, and those that are expected to begin shortly, and you'll find the context you're lacking.