Kosovo - Who Didn't See This Coming? 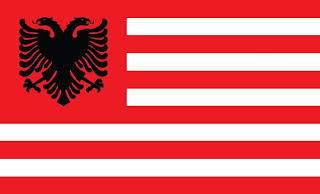 There aren't many places that achieve independence and failed state status on the very same day. Welcome to Kosovo. More or less sovereign since February 17th, the notional state appears to be on the verge of itself breaking apart. According to the International Crisis Group, Kosovo is teetering on the edge of de facto partition:

“Major violence has been avoided but the calm is deceptive”, says Alexander Anderson, Crisis Group’s Kosovo Project Director. “Divisions between Albanian and Serb areas have widened. If de facto partition continues, Kosovo’s Serbs south of the Ibar River will be at risk, pressure will mount to redraw borders on ethnic lines throughout the states of the former Yugoslavia, and EU membership prospects for these countries will fade”.

Meanwhile Serbia is putting its own chances at EU membership at risk by, "pressing the UN General Assembly for an International Court of Justice opinion on the legality of Kosovo’s independence." Can't be having that now, can we?

Kosovo currently gets a staggering 30% of its GDP in the form of transfers from ex-pats living in countries that have functioning economies. Much of the rest comes in the form of foreign aid. As an independent state it just doesn't make much sense, except in fulfillment of Washington's foreign policy.

Curiously, in its 4 September, 2008 update on Kosovo, the CIA World Factbook has excised any reference to what had been one of Kosovo's biggest economic sectors - the smuggling of cigarettes and cement. Oh well, maybe they've all kicked the habit. With a per capita GDP of just $1,800, Kosovo has a fast lock on the title of Europe's poorest state.
Posted by The Mound of Sound at 9:54 AM

Email ThisBlogThis!Share to TwitterShare to FacebookShare to Pinterest
Labels: Kosovo

Sorry, jerk, but I'm just not in the mood for idiotic, off-topic remarks.

Thanks, Mound, I had to let that one go before I said something I regretted (a concept unheard of by your little anonymous friend ;).

As a blog administrator, do you find certain weather patterns bring them out, or is it random?

Hey, Jerk. I just timed it. 18-seconds to open my blog and delete both of your comments.

Hi Joseph. I don't know. It probably has something to do with phases of the moon and hairy knuckles.

Just a couple of seconds, jerk. You give me real pleasure consigning your lunacy to the bin. Bye, bye, loser.