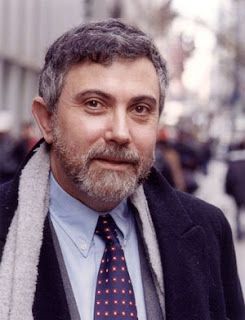 For years, the Right has treated Paul Krugman as though he was Satan's retarded child. What was his mortal sin? He outlined the inevitability of the very meltdown that's happening now. Ooopsie!

So here is the Princeton economist and New York Times' columnists insight into where this is heading:

This flight to safety has cut off credit to many businesses, including major players in the financial industry — and that, in turn, is setting us up for more big failures and further panic. It’s also depressing business spending, a bad thing as signs gather that the economic slump is deepening.

And the Federal Reserve, which normally takes the lead in fighting recessions, can’t do much this time because the standard tools of monetary policy have lost their grip. Usually the Fed responds to economic weakness by buying up Treasury bills, in order to drive interest rates down. But the interest rate on Treasuries is already zero, for all practical purposes; what more can the Fed do?

Well, it can lend money to the private sector — and it’s been doing that on an awesome scale. But this lending hasn’t kept the situation from deteriorating.

...government takeovers may be the only way to get the financial system working again.

Some people have been making that argument for some time. Most recently, Paul Volcker, the former Fed chairman, and two other veterans of past financial crises published an op-ed in The Wall Street Journal declaring that the only way to avoid “the mother of all credit contractions” is to create a new government agency to “buy up the troubled paper” — that is, to have taxpayers take over the bad assets created by the bursting of the housing and credit bubbles. Coming from Mr. Volcker, that proposal has serious credibility.

Thursday night Ben Bernanke and Mr. Paulson met with Congressional leaders to discuss a “comprehensive approach” to the problem.
We don’t know yet what that “comprehensive approach” will look like. There have been hopeful comparisons to the financial rescue the Swedish government carried out in the early 1990s, a rescue that involved a temporary public takeover of a large part of the country’s financial system. It’s not clear, however, whether policy makers in Washington are prepared to exert a comparable degree of control. And if they aren’t, this could turn into the wrong kind of rescue — a bailout of stockholders as well as the market, in effect rescuing the financial industry from the consequences of its own greed."

Now remember, it's the same clown car full of pols and regulators who allowed this to occur in the first place. And they're going to fix it? Remember back when we used to envy American taxpayers?

Hey, all you Right-Wingers out there. Remind us how great your free market economic theories are. I can't seem to remember how that goes.
Posted by The Mound of Sound at 8:10 AM

More crony capitalism. They all should have failed, so that in the future this will not repeat. Instead they have learned that if you f*ck up bad enough, Uncle Sam will pay your bills.

Note: Do you know how the Fed (which is not a government institution) will get the money to by bonds or make lonas?

It will simply print it, out of thin air with no backing.

I guess we know what the Argentines felt like in 2001 eh?

Good points Mike. I got a chuckle out of that.