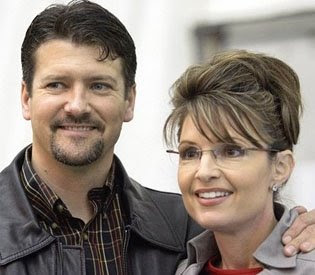 Maybe it's just one of those giddy ideas that gets a bit of traction yet some pundits are talking about whether the McCain organization has decided the only safe thing to do is ditch Sarah Palin.

Where was she after last night's debate when her Democratic counterpart, Joe Biden, was making the rounds of the TV networks? It turns out the McCain people wouldn't make her available for interviews - no live TV appearances for Sarah Palin.

The Huffington Post has this from radio talk show host Ed Schultz:

"Capitol Hill sources are telling me that senior McCain people are more than concerned about Palin. The campaign has held a mock debate and a mock press conference; both are being described as "disastrous." One senior McCain aide was quoted as saying, "What are we going to do?" The McCain people want to move this first debate to some later, undetermined date, possibly never. People on the inside are saying the Alaska Governor is 'clueless.'"

Now, in fairness, Schultz is a progressive and he's said some pretty scathing things about Palin before. But what about the uber-uber-right, National Review? HoffPo links to this opinion piece by the NR's very conservative commentator, Kathleen Parker, who claims Palin should take a powder:

As we’ve seen and heard more from John McCain’s running mate, it is increasingly clear that Palin is a problem. Quick study or not, she doesn’t know enough about economics and foreign policy to make Americans comfortable with a President Palin should conditions warrant her promotion.

It was fun while it lasted.

Palin’s recent interviews with Charles Gibson, Sean Hannity, and now Katie Couric have all revealed an attractive, earnest, confident candidate. Who Is Clearly Out Of Her League.

No one hates saying that more than I do. Like so many women, I’ve been pulling for Palin, wishing her the best, hoping she will perform brilliantly. I’ve also noticed that I watch her interviews with the held breath of an anxious parent, my finger poised over the mute button in case it gets too painful. Unfortunately, it often does. My cringe reflex is exhausted.

Palin filibusters. She repeats words, filling space with deadwood. Cut the verbiage and there’s not much content there.

If BS were currency, Palin could bail out Wall Street herself.

If Palin were a man, we’d all be guffawing, just as we do every time Joe Biden tickles the back of his throat with his toes. But because she’s a woman — and the first ever on a Republican presidential ticket — we are reluctant to say what is painfully true.

...Only Palin can save McCain, her party, and the country she loves. She can bow out for personal reasons, perhaps because she wants to spend more time with her newborn. No one would criticize a mother who puts her family first.

Do it for your country.

As if the McCainsters don't have enough problems without lugging about this anchor, Biden made it clear last night that Palin has no reason to expect any kid glove treatment from him when they square off in the vice-presidential debate. Conservative Kathleen Parker is right. Palin does exhaust your cringe reflex.
Poor old Johnny McSame. He hired her for the bump and now he's stuck with the grind.

h/t Unrepentent Old Hippie
Posted by The Mound of Sound at 10:07 AM

In reading this yesterday, the epiphany I had was of course she will "step aside."

It's his last hail mary.

My bet is on Romney (economist extraordinaire - gag) to step in nobly.

Compared to the O'bumma One she has legions of experience. He is a "Community Organizer" a couple of years in the senate voting "present".

She will have no problem debating the brilliant Joe Biden . . .
Joe after spending 37 years in the senate . . . he's just a human gaff machine.
Last week while being interviewed by the wonderous Katie Couric . . . Joe told Katie how, back in 1929 when the market crashed, FDR went on TV to calm the American public. Katie just absorbed it all like a true clueless lefty.
Any of you pick up on this monsterous GAFF???? The MSM certainly didn't . . .
Reality is Hoover was president in 1929 and television was invented much later.
If McCain or Palin had made such a monsterous gaff it would be all over the air waves . . . but loney liberal land (the MSM) let it fly by . . . why do you suppose that is? I know, most in the media believed Joe . . . I am still rolling on the floor.

The elitist wing of the conservative movement has always been wary of us libertarians coming into the GOP. Sarah Palin is one of the top elected libertarian Republicans in the country, (along with Idaho's Gov. Butch Otter, and Cong. Jeff Flake of AZ).

Of course, she's going to make some conservatives nervous.

They are wary of her libertarian cultural views. This is the woman, after all, who famously fought back against social conservatives in Wasilla who wanted to run all of the bars and taverns out of town.

They even started a whisper campaign in Alaska during the 2006 primaries that Sarah wasn't really a Republican, but rather a "closet libertarian." She had attended a couple local Libertarian Party meetings seeking their support.

But what she loses from the social conservatives, she gains 10 times over in libertarian votes.

Figure, Libertarian Bob Barr was polling 6% nationwide in mid-summer. As high as 10% in New Hampshire. And post-Palin he's now down to 1%.

Ever since Goldwater the eastern establishment Republicans have distrusted Western cowboy individualists in the GOP.

With Sarah Palin, the libertarian wing of the GOP has finally arrived. Of course, that's going to make some other Republicans nervous.

Get over it Conservatives, THE LIBERTARIANS HAVE ARRIVED!!

Eric, you might be right. Still, it's fascinating to see how this plays out. And, PreSchool, it's recess - your playground time.

Just one question, Eric. If, as you claim, Palin is a Libertarian, how do you square that with her insanely radical views on issues like abortion? I've never heard of a Libertarian who would deny the right to an abortion even to a rape victim, have you? I suspect any true Libertarian would find some of Palin's thinking downright perverted.