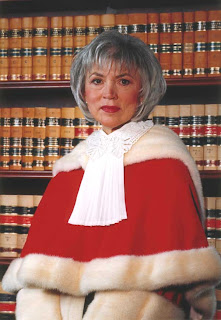 The Canadian Judicial Council has rejected out of hand a ploy by uber-right, religious nutjob Charles McVety to have Chief Justice Beverly McLachlan pulled from the bench for supposedly playing an inappropriate role in getting the Order of Canada for Dr. Henry Morgantaler.

The Council said the complaints - 11 in all, comprising copies of McVety's own letter signed by supporters - were utterly without merit and based on hollow allegations readily disproved by publicly available information.

McVety, greaseball to the end, couldn't resist taking a swipe at the Council. "When you're appealing to the very council that the chief justice is a part of, fairness is not to be expected and in my view fairness has not been delivered by the council." What a sphincter!
Posted by The Mound of Sound at 8:43 AM