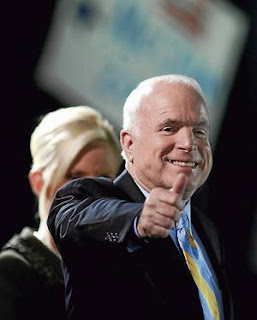 America's credit crunch crisis is trouble for plenty but a golden opportunity for some - like Senator John McCain.

McCain, while he appears to be suffering in the polls due to voter discontent with the Republicans and their ways, has decided his way out may be to turn those lemons into lemonade. How? By positioning himself to claim that he is the guy who saved America's bacon in this emergency.

Forget all the Repug spin about this crisis being the fault of the Dems. The whole derivative scam was the handiwork of McCain's own cherished economic advisor, former Senator Phil Gramm, who, while chairman of the Senate Banking Committee instituted and pushed through two pet projects, the Gramm-Leach-Bliley Act of 1999 and the Commodity Futures Modernization Act of 2000. "Commodity" "futures" "modernization" put'em all together and they spell poison for the masses.

Throughout his campaign, McCain has regularly revealed his avaricious, craven, manipulative and exploitative talents and they are powerful indeed. He's also shown a steady hand at the worst of Rovian tactics.

Most Americans have a weak, incomplete or misguided understanding of just what's going on. It's hard to blame them, given the deterioration in the quality of their mass media which no longer bothers trying to understand or analyze but offers itself up as a repeating station for political messaging. What filters down are words like "greed" "700-billion dollars" "trillion dollars" "Wall Street" "bail out."

What's not explained to people is constipation. How is the American economy dependent on the free flow of credit and what risks does the economy face of America face if their country encounters credit constipation? This is a subject that doesn't have high drama. There are no heroes, no villains, no guilty faces to throw up on screen. Here's how Krugman sees it. From the New York Times:
Many people on both the right and the left are outraged at the idea of using taxpayer money to bail out America’s financial system. They’re right to be outraged, but doing nothing isn’t a serious option. Right now, players throughout the system are refusing to lend and hoarding cash — and this collapse of credit reminds many economists of the run on the banks that brought on the Great Depression.
So the grown-up thing is to do something to rescue the financial system. The big question is, are there any grown-ups around — and will they be able to take charge?
...one non-rank-and-file Republican, Senator John McCain, is apparently playing spoiler. Earlier this week, while refusing to say whether he supported the Paulson plan, he claimed not to have had a chance to read it; the plan is all of three pages long. Then he inserted himself into the delicate negotiations over the Congressional plan, insisting on a White House meeting at which he reportedly said little — but during which consensus collapsed.

The Iraq War scam shows that an awful lot of Americans don't want to know. They get stirred up and then they react. That's what John McCain is counting on to turn his pig's ear into a silk purse. When the mob hits the streets with their torches and pitchforks, McCain knows the safest place to be is right in front leading them on.

He knows that it's critical for him to ride this wave. He has to be seen to be the voice of the American public's anger and frustration. If that means killing the deal, he'll do what it takes.

McCain realizes that, with the election just weeks away, he might just pull this one off. If he wins, kills the bail out, and it backfires on the American economy, the election will have come and gone before people start pointing fingers at him. By then he'll either be safely headed for the White House or drifting off to retirement.

If, however, he loses, he can claim the mantle of champion of all those upset Americans who are being ignored "as usual" by those damned politicians in Washington, those elitist bastards. Once again, he wins.

Will the American people see through McCain's gambit? I wouldn't bet on it. With his recent shenanigans about suspending his campaign and postponing debates he might have overplayed his hand. Then again, maybe not.
Posted by The Mound of Sound at 7:20 AM

The two are tied.

Well, Anon. That's one poll. The NBC poll is pretty close to that, it has Obama up just a couple of points. WaPo has the gap at 9%. Another comes in at the low double digits.

Actually, the gallup poll in one night of additional polling now shows Obama up 3. So, he essentially gained a lead in their poll last week, dipped down to a tie and now is up three again.

Obama must have had a really incredible show of support in last night's polling with them.

I think it is minor but since anon felt the need to bring it up, thought I'd set the record state.

As you so aptly put it, "Nice try anyway."

Thanks Joseph. I can't bring myself to chase polls so I appreciate the update.
Cheers