America's Credit Crisis - What's In Store for Us? 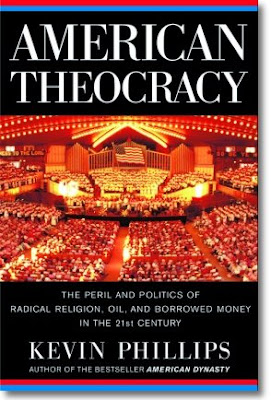 The credit crisis now gripping the US appears to have come as a surprise, even to the rich and powerful. Now you have to ask yourself why and just what does that mean?

If you want to understand what's happening and where America, our economic Big Brother, is heading, a good place to begin is by reading Kevin Phillips book, "American Theocracy." I really believe that Phillips lays out how America got where it is today and what lies in store for the United States - and the rest of us - over the next two decades.

Kevin Phillips IS NOT a liberal. He's a Republican, through and through. He's an insider, a former Republican strategist. He's been a political and economic commentator for thirty years. He's written several books including, "The Emerging Republican Majority", "Staying on Top" and "American Dynasty." Kevin Phillips is about as red, white and blue as they come. He's not going to contaminate your pristine mind with any socialist dogma. All he's going to do is point out the truth that he knows today's Republicans simply don't want to hear.

The complete title of this book is "American Theocracy, The Peril and Politics of Radical Religion, Oil, And Borrowed Money In The 21st Century." It was written, I believe, in 2005 which actually makes it a lot more interesting today than it was just three years ago.

Because the past repeats only in general resemblance, there is always something different, something new. This truth, together with the usual effects of the passage of time, makes it easy for later generations to dismiss any awkward precedents - and so it has been with the demobilization of manufacturing and embrace of debt in the contemporary United States.

...conductors of the orchestra of American hubris wave star-spangled batons and the chorus resounds: Washington rules, the world manufactures for the United States, and our current-account deficit reflects nothing more than global anxiety to invest in U.S. prosperity. Who knows, the Treasury may even be planning a statue of an American consumer supporting the world on his back.

However, if pride goeth before a fall, cocksureness about the manageability of U.S. public and private indebtedness may as well, given threats that range from debt crises to currency humiliation. Crippling indebtedness is like the ghost of leading world economic powers past, a familiar Shakespearean villain come to stalk the current hegemon.

...None of these hegemons [Holland, Spain and Britain] started with well-developed finance. They began with simpler vocations. Castile, the heart of Spain, was a culture of high-plateau wool growers and skilled soldiers who had spent centuries reconquering the Iberian peninsula from Muslim emirs before conquistadores found gold and silver in Central and South America. The Dutch, as we have seen, had a unique talent for vocations having to do with ships, seas and winds. The English pioneered coal development and superseded the Dutch as masters of the seas. But after several generations of success in soldiering, seafaring, or manufacturing, these peoples, in their respective heydays, were drawn farther in the direction of globalism, financial services and capital management.

...Excluding the unusual case of Spain, the leading economic powers have followed an evolutionary progression: first, agriculture, fishing and the like, next commerce and industry, and finally finance. Several historians have elaborated this point. Brooks Adams contended that 'as societies consolidate, they pass through a profound intellectual change. Energy ceases to vent through the imagination and takes the form of capital.'

In 1908, ...Winston Churchill, then president of the British Board of Trade, vented a similar historical interpretation in finding 'the seed of imperial ruin and national decay' in 'the unnatural gap between the rich and the poor' and 'the swift increase of vulgar jobless luxury.'

...The word "rentier" - meaning a person living off unearned income - comes from the French, as do so many other words connected with money and plunder: financier, profiteer, buccaneer. Over the last four centuries, however, it was first Spain, then Holland and Great Britain, and now the United States that created the most notable rentier cultures. Each ultimately became vulnerable as a result.

...Because intermittent high debt ratios were so central to the evolution of each of the leading world economic powers, each became comfortable - too comfortable - with debt as a long-standing experience, practice, and tactic. Particular overconfidence was instilled by memories of how often previous debt problems had been surmounted, even at extreme levels (100 to 200 percent) of GDP or GNP.

...Understandable as this cockiness might be, history teaches a crucial distinction: nations could martial the necessary debt-defying high-wire walks and comebacks during their youth and early middle age, when their industries, exports, capitalizations, and animal spirits were vital and expansive, but they became less resilient in later years. During these periods, as their societies polarized and their arteries clogged with rentier and debt buildups, wars and financial crises stopped being manageable. Of course, clarity about this develops only in retrospect. However, even though war-related debt seems to have been part of each fatal endgame, the past leading world economic powers seem to have made another error en route. They did not pay enough attention to establishing or maintaining a vital manufacturing sector, thereby keeping a better international balance and a broader internal income distribution than financialization allowed."

Any of this sounding familiar?

American Theocracy is a "must read" if you want to understand the current economic crisis in the United States and the long-term consequences we all may be facing. It's a well-written book, well documented and full of clear logic and history.

Analysts Predict: Your Financial Savings Will Be Gone In 12 Months

BREAKING NEWS: Analyst predicts the fall of the US Dollar within 12 months

The US is no longer the power house and it once was.

We already have more problems than we can handle across the border.

Not to mention the unemployment rates rising.

Now all these things are NOTHING to what’s going to come next.

You see the US Dollar itself is going to collapse.

The downtrend has been clear since 1973.

Now we’re on the verge of total financial meltdown.

And the worst thing is…

We cannot stop or avoid it this time.

Make sure you watch that video before it’s taken down by the government.

This is serious stuff and you need to share it with your friends and family if you truly care about their safety.