Palin Craters - Score One for the Blogosphere 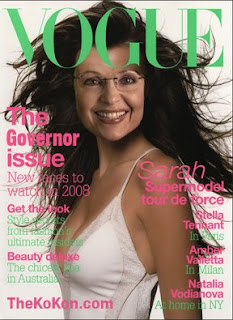 At first Sarah Palin was a balloon lifting John McCain's stagnant campaign. Now that balloon has burst as people see Palin for what she is/was - a totally cynical ploy by John McCain and Americans are beginning to reject her with the same passion they so recently embraced her.

Markos Moulitas of Daily Kos credits the blogosphere for not letting McCain get away with it:

Bloggers and tradmed reporters took a hard look at Sarah Palin and began raking her over the coals for myriad transgressions. She is a liar with theocratic tendencies, sports an intellect that makes Bush look like a Mensa member, and features an obvious fondness for Cheney-style abuses of power. And that's not even the worst of it.

...we continued to focus on Palin. Republicans were busy trying to build a positive narrative about Palin -- the "hockey mom" who was so folksy she could "field dress a moose" and had "said no to the Bridge to Nowhere and other government waste" and was overflowing with "small town values." McCain had shot up in the polls because of Palin. Common sense dictated it would be hard to knock him back down as long as she consolidated her popularity."

"That's a shocking 21-point collapse in a single week. She went from being just about the most popular person on the top of the ticket, to the (lipstick wearing?) goat.

...Palin will continue to excite and energize the wingnut base. She was designed for that purpose, and won't fail at that task. But her cratering popularity now hampers McCain's efforts to expand beyond that core base.

All of this is happening because we did not relent on Palin, blocking Republican efforts to paint her in a positive light. The results are speaking for themselves."

Moulitas also points out that there's been a change in the latest McCain ads. A week ago they were "McCain-Palin." Lately they've gone back to just "McCain."

Palin is trending down and it's hard to see that she has any other way to go. Now even her husband is refusing to appear to hearings after being subpoenaed. Todd must've got the word that top Republicans - or their spouses - are above the law.
Posted by The Mound of Sound at 8:10 AM

Not showing up at investigative hearings eh?

Reminds me of another group from a little closer to home...