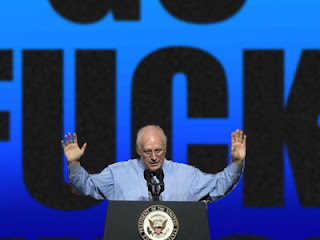 A US District Court Judge has forbidden the destruction of documents from Vice President Dick Cheney's years in the White House.

As you may have guessed, Cheney was opposing this. I suspect he'd like to leave a lot of his paper trail in the form of ashes. That seems to be what the judge thought too. From CBC.CA:

A private group, Citizens for Responsibility and Ethics in Washington, is suing Cheney and the Executive Office of the President in an effort to ensure that no presidential records are destroyed or handled in a way that makes them unavailable to the public.
The judge said the administration's legal position "heightens the court's concern" that some records may not be preserved.

In a 22-page opinion, Kollar-Kotelly revealed that in recent days lawyers for the administration balked at a proposed agreement between the two sides on how to proceed with the case.

She said the administration wanted any court order on what records are at issue in the case to cover only the office of the vice-president, not Cheney himself or the other defendants in the lawsuit: the Executive Office of the President and the National Archives.

The suit alleges that the administration's actions over the past 7½ years raise questions over whether the White House will turn over records created by Cheney and his staff to the National Archives when the newly elected administration takes over in January.

Now, all those who believe Dick Cheney is going to leave the paper trail intact, please raise your right hands and board the bus to Fantasyland.
Posted by The Mound of Sound at 11:02 AM