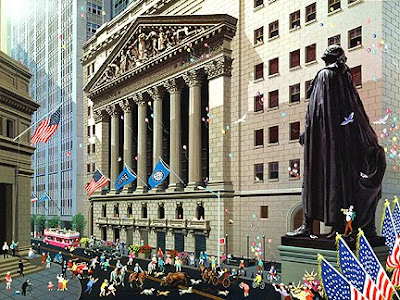 See, socialism isn't all that bad. Now that Washington has taken a page out of Fidel's book and begun nationalizing its mortgage, securities, investment banks and insurance industries, stock prices are on the rebound and worried investors are breathing a huge sigh of relief. And today they announced a starter (you watch) fund of $50-billion in loan money for money market mutual funds.

Of course, as pointed out in a McClatchey Newspapers item recently, the American way is to privatize gains and socialize only the losses. That way the rich folk actually do get their cake and get to eat it too no matter how badly they've screwed up. And that's what makes America the greatest land of all.

I saw a pity piece in one of the American papers lamenting the downfall and suffering of the former head of Lehman Brothers. The article showed that this guy had lost too - big time. Why he used to get paid $34-million a year (that's just shy of $3-million a month) and now he's out of work. His holdings in Lehman were valued at $1-billion last month and now they're a million, tops. Of course nobody wants to point out that this guy raked in hundreds of millions of tax sheltered bucks while he was asleep at the wheel, driving his company's investors straight off a cliff. I might feel sorry for the guy - if an angry mob had actually flayed him alive - but it sounds to me like he's come out of this just fine.

Early on in his administration, George w. Bush realigned America's tax system to shift the burden of feeding his insatiable government off the shoulders of the investor class, the rentiers, and more directly onto the shoulders of the working people, let's just call them wage earners. He largely freed capital gains, the money made by investors, from Washington's tax grab - which shifted that little obligation over to the silly wage earners.

Now, did the little guy's taxes go up to reflect that new tax burden? Of course not. Why not? Because it was all floated on borrowed, foreign money. You might have had all those wage earners marching down Pennsylvania Avenue in the middle of the night with torches and pitchforks if you were open with them and handed them the rich folks' tax bill. Best to get the foreigners to loan you the cash and not trouble the little people with these petty details. Don't worry, you'll find some of that money when you start trimming their Social Security cheques.

Remember that video clip of George addressing a black tie dinner when he got that grin on his face and scanned the crowd and said he saw "the haves and the have-mores - my base." He wasn't joking. He meant it and he's shown that repeatedly over the past eight years.

Why? Because they've been blinded to it. You don't know that your savings are gone until somebody opens the vault door. Keep that door shut by using money borrowed from foreigners and they won't know the difference. And, if somebody does try to warn them, a latter day Paul Revere sort of thing, well you simply jam the message. You get the powerfully corporatized media and the blatantly partisan Fox News and all those angry, open mouth radio guys like Limbaugh and Savage and their ilk to denounce the left, the looney left. Americans have been subjected to propaganda on a level not seen outside the Communist world since the 30's.

Where is the public debate on these issues? You won't hear it from the Republicans, they know better, but why aren't the Dems using this obviously powerful stuff? One reason is that they're not far enough removed from this chicanery themselves. They've supported a lot of this stuff. Another reason is that anyone who talks about this is branded a "liberal" and, to many Americans, liberal = elitist = socialist = revolutionary = traitor. They get fed that nonsense every day.

To me, America resembles one giant, cheque-kiting scheme. I became familiar with those back when I did fraud work. They often start off quite small and then they build to a higher level, almost a plateau for a while, and then they tend to go full bore usually just before the police show up or the bad guy heads for the airport with the cops hot on his trail.

The American government and especially the Pentagon quietly let on that they see China as America's emerging strategic threat. They're not keeping it secret, they just don't go on about it. Now China, by all appearances, is set to become the world's next economic giant, outstripping the US.

The Bush Doctrine, the policy that Sarah Palin had never heard of, holds that America reserves the right to use its military muscle to subdue any nation or group of nations that rises to become as economically or militarily powerful as America. In other words, growing bigger than America will be taken as an act of war, a casus belli as it were. That would seem to put China on its way into America's crosshairs.

Okay, let's work this through. You've identified C as your looming strategic threat. You ship your industrial base to C and use your wealth to grow C's economy. Meanwhile you can't resist a pipeline of cheap money loaned back to you by C, putting your country in hock to your strategic rival. Then you financialize your economy which leaves you extremely vulnerable to creditors - especially foreign countries just like C - while you drive your country with its financialized economy steadily deeper into deficits, debt and unfunded obligations which is sort of like giving a box of Havana cigars to a lung cancer patient.

What gives? Here's a way to make sense of this. Years ago a psychiatrist explained to me that even when people do self-destructive things, they do it because they get something out of it. In other words, this may seem like madness but you have to realize that someone, some influential group, is getting something out of this no matter that, overall, it all seems harmful to the United States of America.

At least you can't say this is boring.
Posted by The Mound of Sound at 8:10 AM

You might have had all those wage earners marching down Pennsylvania Avenue in the middle of the night with torches and pitchforks if you were open with them and handed them the rich folks' tax bill.