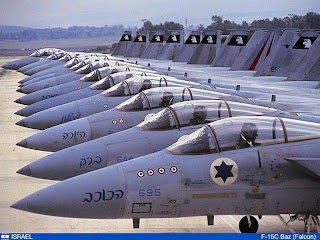 The Guardian is reporting that George w. Bush derailed Israeli plans for air strikes on Iranian nuclear facilities earlier this year. Bush is said to have told Israeli prime minister, Ehud Olmert, that Washington didn't believe that Israel could take out Iran's nuclear plants without a prolonged air campaign that would ignite a major Middle East war. He also said it would likely spark Iranian attacks against American forces in Iraq and Afghanistan and on oil shipping in the Persian Gulf.
The newspaper's account is third hand. They're relying on statements from two aides of a European head of state who informed them of what Olmert had told him during a visit to Israel. So, Olmert reportedly revealed this to the European head of state who subsequently related the account to his aides who, in turn, let it slip to the English paper.
Does this rule out an American air campaign against Iran? That remains an open question. There is some speculation that, should Obama win the November election, Cheney might pressure Bush to take out Iran's nuclear facilities before leaving office.
Posted by The Mound of Sound at 8:32 AM

Why would he want to AVOID a war with Iran?

Why would Bush want to avoid war with Iran? Because it would blow up in his face - in Afghanistan, in Iraq, and in the Persian Gulf, that's why. He'd destroy what's left of the American economy. Think man, think. Iran has the highest-tech anti-shipping missiles - they're mobile to boot - and it could shut down the oil routes long enough to send the global economy into a deep recession, possibly a depression. You seem to be quick to formulate questions. Why not learn a bit so you'll find the answers?