A Brighter Day for America and Everyone 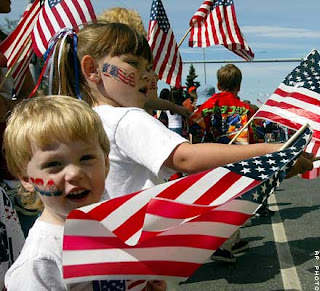 It might last just a few years if we're lucky, several more if we're not, but the America that emerges from the meltdown that's just beginning to take hold is bound to be a better, healthier, more dynamic country - more closely resembling a sophisticated version of what it was in the 60's than the diseased stepchild of the Reagan era.

The United States of America spent 30-years getting sick, really sick. Today's meltdown is just the fever of that long-cultivated illness.

And what a sickness it was. It was a disease of both body and mind. The predisposition to this malady has been around since the country's earliest days. It came in the form of what's known as "American exceptionalism." It's the sort of mass delusion that comes to the fore when Americans (such as Sarah Palin) talk about the "City on the Hill." It works its way through the American system in manifestations such as state rights, the every man a king sort of thing. It is infuriated by the perceived threat to liberty in central authority and any restraint on the notional "land of opportunity."

Most of that has been pretty thoroughly trashed over the past generation although the myth of exceptionalism dies hard. Look at recent videos of angry crowds lined up to get into McCain/Palin rallies. They seem to sense that the myth is over and they're both afraid of and furious at the uncertainty ahead.

It's not entirely the Americans' fault. Foreign lenders were all too happy financing this bachannal, especially the Chinese who watched America's indentured wealth being siphoned off to grow China's economy.

But those days of greed and madness are coming to a close. China is weaning itself off its heavy dependence on American consumers. They'll still play a major part in China's economic ascendancy but the Chinese are now creating their own markets out of their own domestic affluence. The story is similar for India. The Euros, likewise, are looking to expand and cement their trade ties into alternate markets.

But it's not just the markets and fiscal policy that will bring America back to sanity. It's also the country's social policies and the looming crisis of its state and municipal governments' neglect.

I did a post about a year ago detailing how India is opening 29-new science and technology universities every year. China, too, is churning out legions of mathematicians, scientists and engineers. America, by contrast, is lurching backward in training its next generation of leaders. The New York Times' op-ed columnist Bob Herbert focused on the double whammy coming America's way from the failure of its education policies and the looming collapse of its decayed infrastructure:

'“The United States is failing to develop the math skills of both girls and boys, especially among those who could excel at the highest levels, a new study asserts, and girls who do succeed in the field are almost all immigrants or the daughters of immigrants from countries where mathematics is more highly valued.”

The idea that the U.S. won’t even properly develop the skills of young people who could perform at the highest intellectual levels is breathtaking — breathtakingly stupid, that is.

Meanwhile, the country is going down the tubes. Felix Rohatyn, who helped lead New York City out of the dark days of the 1970s fiscal crisis, had an article in a recent issue of The New York Review of Books (with co-author Everett Ehrlich) lamenting the sad state of the U.S. infrastructure. Most Americans are oblivious on this issue. We’re like a family that won’t even think about fixing a sagging, leaky roof until it collapses on our heads.
New Orleans was nearly wiped from the map in the Hurricane Katrina nightmare, and 13 people were killed when a bridge in Minneapolis broke apart during rush hour, hurling helpless motorists 60 feet into the Mississippi River. Neither of those disasters was enough of a warning for us to think seriously about infrastructure maintenance, repair and construction.

Could these types of disasters happen again? They’re going to happen again. Mr. Rohatyn reminds us that nearly 30 percent of the nation’s bridges are “structurally deficient or functionally obsolete.”

We haven’t even got sense enough to keep an eye on the water we drink. Citing a report from the American Society of Civil Engineers, Mr. Rohatyn and Mr. Ehrlich write: “Current funding for safe drinking water, amounts to ‘less than 10 percent of the total national requirement.’ ”

A country that refuses to properly educate its young people or to maintain its physical plant is one that has clearly lost its way. Add in the myriad problems associated with unnecessary warfare and a clueless central government that wastes taxpayer dollars by the trillions, and you’ve got a society in danger of becoming completely unhinged."

This is the price exacted of a country that equates education with elitism and believes that taxation is nothing short of robbery. I recall a case from several months back where Louisiana voters, whose state is about as impoverished and backward as you can find in the Lower 48, introduced and passed a proposition to slash funding for education for no reason other than to shave a couple of points off the tax rates.

Astonishing, absolutely astonishing. But now, finally, this drunken orgy is coming to an end. The era of 4,000 sq. ft. homes for everyone is over. America is about to enter a period of sustainable retreat and, in that, lies its salvation. For despite all the excesses of the past decades there remains within the United States a core of vitality that has survived by staying low key, mainly in the halls of academia. It's from America's top universities that a new generation of clear thinkers will emerge, free of the now utterly discredited dogma and jingoism that has brought their country to its knees.

These are the people who understand the need to again invest their country's wealth in rebuilding America's economy, not China's - in the need to reward effort, production and innovation, not bogus paper shuffling and coupon clipping. They don't need to be told that America's strength lies in the health of its blue and white collar working and middle classes, not the rentiers.

We will see these people come forward over the next decade to cure the madness that is today's America. It'll be a long road back and there'll be a lot of potholes along the way but there's no other option if America is to maintain its place in the community of nations.
Posted by The Mound of Sound at 7:58 AM

Email ThisBlogThis!Share to TwitterShare to FacebookShare to Pinterest
Labels: recovery, US meltdown

I hope your hopes are well-placed and your assessment correct.

It would be nice to see the US make its way back from the strange and unsettling place to which it has meandered over the past few decades.

..Frankly, it's a great argument for the legalization of hallucinogens. No LSD trip could be worse than the strange state of hypnosis and self-delusion that has gripped the US for lo these many decades.