McCain and Palin Go For the Throat - Each Other's 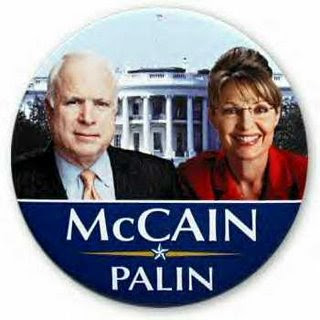 The giveaway was the morning after the vice-presidential debate when Sarah Palin let slip that she had learned of the McCain campaign's decision to pull out of Michigan when she read it that morning in a newspaper. To quell any doubts, she then proceeded to criticize McCain's decision and said she and Todd could have worked the state if McCain wasn't up to it.

It was obvious that McCain hadn't consulted Palin about the Michigan decision. He hadn't even informed her. She had to find out about it from a newspaper well after his campaign had announced it to the press. Her response put McCain's wisdom, even courage into question. Ouch, ouch, ouch and ouch.

Since then, Palin hasn't minced any words about what she sees as McCain's weakness in going after Obama. She has repeatedly criticized McCain's refusal to go after the Reverend Wright issue.


Now, as reported by Canadian Press, it's come to open warfare among McCain's and Palin's insiders:

"The tattered remains of their ticket were everywhere Sunday, with both McCain and Palin insiders publicly on the attack to hold the other side responsible for their candidate's woes on the campaign trail.

"She is a diva - she takes no advice from anyone," an unnamed McCain adviser told CNN over the weekend.

"She does not have any relationships of trust with any of us, her family or anyone else ... also, she is playing for her own future and sees herself as the next leader of the party. Remember: Divas trust only unto themselves, as they see themselves as the beginning and end of all wisdom."

It was their decision to limit Palin's media contact to interviews with ABC's Charlie Gibson and a series of chats with CBS's Katie Couric parcelled out over several cringe-worthy days. They proved to be disastrous for both the Alaska governor personally and McCain's campaign.Wallace sent an emailed response to several news organizations over the weekend: "If people want to throw me under the bus, my personal belief is that the most honourable thing to do is to lie there," she wrote.

In recent weeks, Palin has publicly parted ways with the McCain campaign on various fronts, leading many to speculate she is attempting to distinguish herself from the flailing Arizona senator and forge her own identity in preparation for a run for the White House in 2012."

I think this has been going on for sometime beneath the surface.

I recall some observation about Palin being unaware that McCain had "faux suspended" his campaign as well, seemingly surprised when it came up as she was campaigning that day. I remember thinking it was a bit strange that she wouldn't know, as surreal as the whole happening was it still stood out in my mind.

Strangely, I think the real tipping point on all this blowing out into the open was probably the clothing stories.

Palin may be dense on many things, but I could see her thinking, "God Damn it, I didn't ask for these clothes, they practically pushed me into them. And now I'm gonna get saddled with this too.

It seemed clear to me that by the end of last week she was clearly beginning to talk off script even in her speeches, with some strange zingers that didn't "sound" like the McCain campaign's (somewhat muddled) message tone.

I'm guessing, of course, but it does strike me that this flared up big-time after the clothing cost reports started knocking the campaign off-message (again).