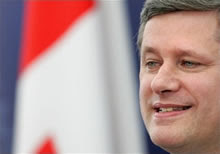 Then his aides told the press that they kept him from revealing what little he did have by way of a platform out of fear he would run off at the mouth and cost the party precious seats. There was a smart bet.

Now even the Americans warn that Harper's "no deficit" promise is so much smoke blown straight up the electorate's backside. From Bloomberg.com:

Canadian Prime Minister Stephen Harper framed his re-election campaign around promises to avoid deficits and a costly rescue of the country's banks.

While his Oct. 14 victory left him with more Conservative Party seats in Parliament, the deepening global financial crisis may force him to backpedal on both pledges.

Throughout the 37-day race, he boasted that Canada's financial system was still sound as other countries bailed out their banks and said a rescue wouldn't be necessary.

"The Americans are bailing out their banks and financial institutions,'' Harper, 49, said Oct. 11 at a rally in the Montreal suburb of Longueuil. "We are investing in jobs right here in Canada.''

The Bank of Canada may let mutual funds and pension funds take part in its short-term debt purchases aimed at shoring up liquidity in credit markets, the Globe also said.

So, there it is. Harper conned Canadian voters so rapaciously that his lies didn't hold up for even 24-hours after the polls closed. I'm sorry but this guy has as much respect for the Canadian people as Parizeau had for Quebeckers in the last referendum when he described them as lobsters ready for the pot. Harper duped his way to a minority win and he deserves our full contempt for the way he did it.
Posted by The Mound of Sound at 10:18 PM

Those idiotic Liberals who didn't vote because they didn't like Dion deserve all the crap that Harper will sling at them. Too bad the rest of us will also get creamed.

Harper is already, as you noted, backtracking from past statements made during the campaign. And yesterday he also spoke of cutting spending to social programs in order to prevent going into a deficit.

He's already on the march while a lot of Libs are too busy crucifying Dion & talking about a "new leader" when we should all be focused & ready to show strength aginst Harper & his plans for this country. It makes me sick!

..zap your frozen...
..i will cancel the GST...
..no new taxes....
Seems to me Mr Harper's part of an ever growing list of succesful PM's and Premiers...that by the way Canadians vote in time after time. He hasnt told the 'big' lie yet...but he probably will, then if history repeats itself he'll be in for the really big majority. The Liberals problems are that Conservatives are now polarized the way that Liberals are. I'm not going to argue that Harper has stretched the truth, but, no one on the Liberal side seemed to mind when Trudeau or Chretien won elections based on lies, so, dont get all pissy when finally Cons hold their leaders to the same ethical standards you guys do..which basically are none!
Get a bandaid for that cut you have. billg

At least now he's plagiarizing from another Canadian! We don't need to import stolen ideas, when there are perfectly good ideas to criticize and then adopt right here!

Dion always seemed uncomfortable in his own skin and his "lack of confidence" probably played a big part in losing the election for him.

I could never envision the man leading our country.

It's sad that no sooner has Dion exited the picture, Harper shows up to rip off his opponent's "Liberal" plan.

Dion was the wrong choice for Liberal learder from the start. He never had the sand to be Canada's PM and I've always maintained that... but at least he was a(seemingly) honest guy.

The good news is... Harper probably isn't going to stick around as Conservative party leader much longer either.

He's gone, what?... 2 elections now, and hasn't been able to secure a majority?

Do you really think he's going to win a majority on his third try? (Especially if Canada suffers even the smallest negative financial effect over the current US crisis over the next 6 - 12 months)?

I think it's time the Conservative Party start looking at a new leader too! (Somebody who can actually win a majority at the outset and not fail over and over and....).

Having said that... I am still actually quite happy that Canada maintains it's minority government. Let's have these guys actually roll up their sleeves and get down to really working with one another here...

I tend to agree with you, "I AM NOT BILL," who as you can see above has returned to the fold.

BillG is right on Trudeau's wage & price control gambit but wrong on Chretien's position which was to scrap the GST if he could replace it with a harmonized federal-provincial sales tax. Stick to reality, Bill. It won't hurt.

SO......I'd like to know what all you people think we ought to hit Harper with? I've sent him an email from overseas telling him just what I think of his bailout for the Banks.....a greedy bunch of money zealots. I will continue to do so until I get a response. Are you going to have the mailman deliver so much mail, the man won't be able to refuse reading. Are you going to write to your local papers. Are you going to encourage everyone you know to write as well. I work overseas and I pay fees in the country I work in to send money to Canada. Canadians banks take anywhere from 10.00 to 27.00 dollars as a transfer fee. They already have the money to invest and then turn around and take transfer money to hand out to investors. Pitiful!!!
Then on top of that, the Canadian government will try to tax me the difference I pay in this foreign country and Canada......again Pitiful!!! Morris