40 Years On, Meadows Revisits "The Limits to Growth" 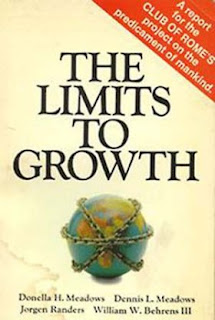 In 1972 professor Dennis Meadows published "The Limits to Growth" in which he predicted the world was on a path to economic collapse.

Now, in an interview with Der Spiegel, Meadows affirms we're very much staying the course.

The problem that faces our societies is that we have developed industries and policies that were appropriate at a certain moment, but now start to reduce human welfare, like for example the oil and car industry. Their political and financial power is so great and they can prevent change. It is my expectation that they will succeed. This means that we are going to evolve through crisis, not through proactive change.

The fact that the collapse hasn't occurred so far doesn't mean it won't take place in the future. There is no doubt that the world is changing, and we will have to go along with it. There are two ways to do that: One is, you see the necessity of change ahead of time and you make the change, and the second is that you don't and are finally forced to do it anyway. Let's say that you're driving a car inside a factory building. There are two ways to stop: Either you put on the brakes or you keep going and hit the wall. But stop you will, because the building is finite. And the same holds true for Earth's resources.

Meadows says that issues under governmental control or regulation are most apt to be neglected.

Our history with fishing shows that we are destroying the oceans' ecosystems, for example. And we're using our atmosphere as a free industrial waste dump. Nobody has an incentive to protect them.

The professor warns there are two types of problems and it's on the bigger type that we're responding most ineffectively.


...there are two kinds of big problems. One I call universal problems, the other I call global problems. They both affect everybody. The difference is: Universal problems can be solved by small groups of people because they don't have to wait for others. You can clean up the air in Hanover without having to wait for Beijing or Mexico City to do the same. Global problems, however, cannot be solved in a single place. There's no way Hanover can solve climate change or stop the spread of nuclear weapons. For that to happen, people in China, the US and Russia must also do something. But on the global problems, we will make no progress.

Meadows foresees major, perhaps global societal collapse with mass death but out of which new societies will emerge for the survivors.   Perhaps we'll revert to tribalism and have to go through the anguished exercise of civilization building all over again.   Perhaps one day we might even re-invent democracy.
Posted by The Mound of Sound at 10:21 AM

Email ThisBlogThis!Share to TwitterShare to FacebookShare to Pinterest
Labels: Dennis Meadows, The Limits to Growth

Along this line, I'm just finishing up a book by Richard Heinberg 'The End of Growth'... a scary future for all mankind if we don't wake up soon and change direction... some say, it's already too late.

John, I'm with professor Meadows. We have foolishly entrusted our political classes with the future of our grandchildren when they refuse to see past the next electoral cycle. We've handed the keys to the biggest drunk in the bar and hopped into the back seat.

Couldn't have said it better.

Hopefully the survivors won't be stooooooooopid enough to rebuild so-called "civilization." As Ghandi opined, Western Civilization would be a good idea, and too bad nobody has tried it.

That must include birth control to help curb the problems of the world.

"... As the rich get richer and the poor get poorer we drop our pretences to humanitarian democracy, instead salute material excess, accept Darwinian business ethics, and pin up as our national polestar the most powerful corporations..."