Who Likes Nexen Way Better than the Canadian People? Liberals 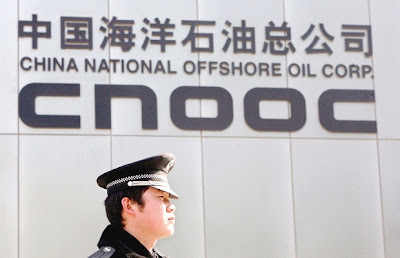 The Canadian public, including Conservative voters, think the Chinese takeover of Nexen is terrible, borderline treasonous.  An Ekos poll finds barely 15% of us support it.   It's a safe bet those miserable numbers would be worse yet if it wasn't for the strong support given for the takeover by Justin Trudeau and the slightly fudged support of his rival Marc Garneau.   And, while it's unclear whether Martha Hall Finlay will go the predictable "duck and cover" route, we know she can't wait to get high-carbon bitumen sailing the seas to Beijing.

They're not quite up to Stephen Harper's standards but Trudeau/Garneau/Hall Finlay are about as fine a gaggle of petro-pols as we can get.   And it's pretty obvious that they're on the side of Big Oil and China and not on the side of the Canadian people.   The people have spoken.  Isn't it time the Liberals stopped talking and began listening?

Maybe it's time the Libs came clean with the Canadian people and merged with Harper's Conservatives.

h/t Richard at Cowichan Conversations
Posted by The Mound of Sound at 12:07 PM

Interesting in this from the poll: "Barely 15% of Canadians support the deal with a picayune 3% supporting it strongly."
Ah yes, the 3 percenters who see themselves as gaining more - those of the rich class, the leisure class, the manor born. Makes sense for Trudeau Jr. to support his class interests. Some things never change no matter how one tries to fake it!

It's a huge mistake for the Liberals to back bitumen.

It certainly demonstrates they're not fit to govern Canada. After Ignatieff they had a chance to straighten up and fly right but they've just stayed in the same spin. I initially "parked" my vote with the Greens but now I'm a committed supporter (even got the card).

And let's not forget the Latter Day Libs, a.k.a. New Dems, are just half a notch better than the Libs when it comes to bitumen trafficking.