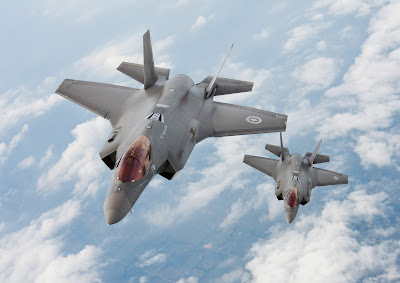 Lockheed Martin has a number of F-35s built and flying.   Surely it's got more than enough to get a few up to the Cold Lake air base to strut their stuff against the competition.

Let's see how they do in dogfighting, in ground support, in the interceptor role.   Let's see how they stack up on range, payload, speed, climb and turn rate, reliability and survivability.  Let's see how they handle defensive and offensive roles or missions that can turn from one into the other quite unexpectedly.   How are they on sortie generation, that is how many missions can you get out of them in a limited interval (something critical when you're only getting a handful of the things)?   Let's see just how truly invisible Lockheed's stealth light attack bomber really is in realistic operational conditions.

There are critics around the world who claim the F-35 can't live up to its promises, that it's all sizzle and no steak.   What an opportunity to prove them wrong.   Lockheed can put its "fighter" up against the most recent offerings from the competition, the Eurofighter Typhoon, the French Rafale, Sweden's Grippen and its own updated American rival, the Super Hornet and, if it's nearly as good as claimed, it should wax them all and deal its critics a body blow in the process.

So let's have a real competition.   Bring your brochures and your data, sure, but also bring your airplanes to show that your data is credible.   Let everybody show what they can and cannot do, how often and for how much and how long.

Sadly there's no sign that Lockheed or the Harper government want to give the F-35 that chance to prove itself in the air, to actually best the competition.   They would rather go for the brochures because, after all, in the defence industry promises are never broken and numbers never lie, do they?
Posted by The Mound of Sound at 8:05 AM

I think you miss the point!
Apart from it's place in the Industrial Military Complex the F35 is an integral part of a Western (superiority)alliance of commonality.
If ,for example, Israel & the Western Powers decide to attack Iran then an Air Force with a common base will be an asset.

Anon, you could not be more mistaken. I have repeatedly depicted the F-35 as Canada's admission ticket to America's aerial Foreign Legion, what you more benignly term the "Western alliance of commonality."

I am very opposed to further Canadian participation in America's overseas military adventures which, as pointed out by Bacevich, consistently fail to yield suitable results.

No, America and Israel, if they want to indulge in an air war against Iran truly don't need Canada's assistance. The mere suggestion of a Canadian role in attacking Iran is laughable.

The F-35 might be a great light attack bomber with a host of severe limitations but, for that, you think Canada should forego its own genuine air defence needs? Bollocks!

But! is it not Harpers quest to join these endevours?
Harpers foreign policy is not based upon Canadian values !!