It's hard to know just how much America spends on its military but it is certainly upwards of $700-billion annually. 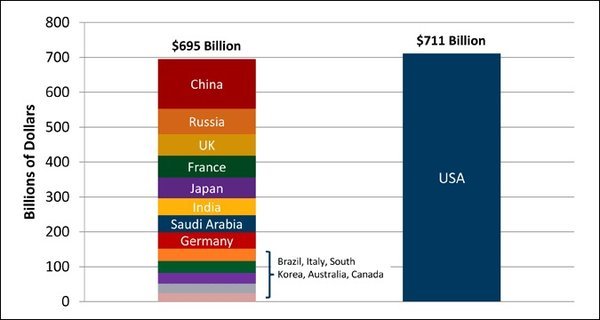 It's even tougher figuring out just how much the second-biggest spender, China, is pumping into its military.   The Chinese claim it's about $100-billion, others peg it at $160-billion, it could be even more.

Yet comparing Chinese military spending with American military outlays really is comparing apples and oranges.   For, while the United States does outspend China several times over, it's how that money is spent that actually favours China.

Washington seeks to maintain a powerful military presence in almost every corner of the planet.   The U.S. Navy and Air Force make this possible even where ground forces aren't particularly welcome.   The current focus is on the Middle East and the more recent "pivot" into Asia.   Even the most gung-ho American commander knows that a ground war in Asia simply is not an option.   This works to China's advantage, allowing it to focus on a narrower range of threats.

In effect, Washington "bleeds" its massive defence budget around the world while China manages to focus its spending on getting more bang for the buck mainly by closing the technology gap.

Many of us still think of China as barely able to manufacture the crap that lines Wal-Mart shelves.   That's not just wrong, it's potentially dangerously wrong, according to an article from the Brookings Institute, Inside China's Secret Arsenal.

U.S. military hardware remains a generation ahead of any rival’s, but the Chinese have begun to close the gap. Consider China’s progress in building advanced warplanes. Until recently, American officials thought their F-22 and F-35 aircraft were the world’s only fifth-generation fighters (the name given to a class of stealthy fighter jets developed in the past decade, which are equipped with radar-evading features, high-performance engines and avionics, and networked computer systems). Then, on a 2011 trip to China, Secretary of Defense Robert Gates learned otherwise. While Gates met with Hu Jintao, his hosts “coincidentally” revealed the existence of an advanced new fighter, the J-20, by staging the inaugural public flight over the city of Chengdu.

Additionally, China is investing heavily in its navy. Today, the U.S. is the only country that can send aircraft carriers loaded with fighter jets to any corner of the globe. The PLA would like to change that. The Chinese have spent the past few years retrofitting a 65,000-ton Soviet aircraft carrier (which the PLA acquired using a fake travel agency as a front) with new engines and weapons including Flying Leopard surface-to-air missile batteries and automated air defense machine-gun systems. The ship, called the Liaoning, can carry approximately 50 aircraft, including the Shenyang J-15 Flying Shark, a fighter jet that may be as capable as an F-18. China is also building stealthy 8,000-ton destroyers, along with nuclear submarines and amphibious assault ships.

...the PLA has more to gain by developing new technologies than by racing to match American sea and air power. China doesn’t have to amass a navy as powerful as the American fleet if it can make the seas too dangerous for U.S. ships to travel. To that end, the PLA is acquiring weapons such as mobile, truck-launched anti-ship ballistic missiles and radar-evading, ramjet-powered Sunburn cruise missiles, which tear toward their targets at Mach 2.5, giving defenses only seconds to respond.

China could also easily go after American vulnerabilities in space. More than 80 percent of U.S. government and military communications, which direct everything from soldiers in the field to precision missile strikes, travel over satellites. GPS satellites control the movement of 800,000 U.S. military receivers on everything from aircraft carriers to individual bombs and artillery shells. The system isn’t foolproof: In early 2010, a GPS “glitch” left almost 10,000 of these receivers unable to connect for days.

China’s most potent new capability, though, might be what the PLA has called “informationized warfare,” or cyber war. Just as the U.S. military has created its own Cyber Command, the PLA has assigned more than 130,000 personnel to cyber warfare programs. And while Secretary of Defense Leon Panetta has warned about a potential cyber Pearl Harbor, the greater threat might be the theft of U.S. government secrets and intellectual property. So far, operations thought to have originated in China have compromised sensitive networks in the State Department as well as computers involved in the F-35 joint strike fighter program.

Communist China has been rapidly arming themselves. That hasn't gone unnoticed, by the entire world. Harper has made us allied with China by, giving them our tar oil very cheaply. China is also being given our resource jobs. China has also been given, the mines and mining jobs in BC. Gordon Campbell sold BC's resources out to China long ago. He also works for Harper, to this very day.

CSIS did warn Canadians of, China's huge inroads into Canada. BC was specifically mentioned because, Campbell had already sold BC out to China.

While other country's are escorting China off their territories. Harper has permitted that country, right onto our Canadian soil.

Harper has given China the right to sue, any Canadians who block Red China's takeover of Canada. BC's corrupt judicial system awarded Red China, all of the BC mining jobs.

What does Canada need a military for? Harper has said. He is sharing the riches resources in our High Arctic, with Communist China and Russia. Communist China and Russia are allies. Russia has state of the art icebreaker ships. They have battleships and fighter jets amassed in their High North. No doubt, there are a few nuclear subs, under the ice.

There are swarms of Chinese. They could overrun any country, by sheer numbers. Canada has a lot of space.

This is humourous...but what secrets does Canada have that it needs to protect....hmmmm??

What secrets does Canada need to protect? I think the question betrays a poor grasp of how Canada and our allies operate. Atop that we need to consider what aspects of Canada most interest China.

I don't worry about China somehow overrunning Canada. The Americans wouldn't tolerate it. As for China and the Arctic, China doesn't have an Arctic coastline. It is interested in establishing some sort of naval presence in the Arctic but it remains to be seen how well that will be tolerated by the Arctic nations.