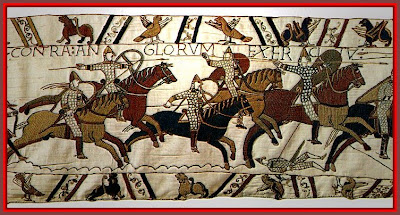 I first became aware of the Norman impact on Britain post-1066 when I learned of its effects on the English language.

Normans, effectively Vikings or Norse from France, settled in as a dominant socio-economic layer atop Saxon England.  They claimed the best of the best - of everything.

The Saxon peasant may have raised chickens but it was his Norman lords who enjoyed "poultry" (poulet).   The Saxon peasant herded cattle but his lord feasted on "beef" (boeuf) and veal.   Sheep from the field became "mutton" on his lordship's table.   Modern English is laced with these traces of Norman dominance over its Saxon people.  They all seem tinged with the elements of affluence and power (indict, jury and verdict for example).

An item in today's Guardian goes beyond linguistics to show how the Norman legacy remains prevalent in modern British inequality.

According to the author Kevin Cahill, the main driver behind the absurd expense of owning land and property in Britain is that so much of the nation's land is locked up by a tiny elite. Just 0.3% of the population – 160,000 families – own two thirds of the country. Less than 1% of the population owns 70% of the land, running Britain a close second to Brazil for the title of the country with the most unequal land distribution on Earth.

Much of this can be traced back to 1066. The first act of William the Conqueror, in 1067, was to declare that every acre of land in England now belonged to the monarch. This was unprecedented: Anglo-Saxon England had been a mosaic of landowners. Now there was just one. William then proceeded to parcel much of that land out to those who had fought with him at Hastings. This was the beginning of feudalism; it was also the beginning of the landowning culture that has plagued England – and Britain – ever since.

The dukes and earls who still own so much of the nation's land, and who feature every year on the breathless rich lists, are the beneficiaries of this astonishing land grab. William's 22nd great-granddaughter, who today sits on the throne, is still the legal owner of the whole of England. Even your house, if you've been able to afford one, is technically hers. You're a tenant, and the price of your tenancy is your loyalty to the crown. When the current monarch dies, her son will inherit the crown (another Norman innovation, incidentally, since Anglo-Saxon kings were elected). As Duke of Cornwall, he is the inheritor of land that William gave to Brian of Brittany in 1068, for helping to defeat the English at Hastings.

My early introduction into the language question left me convinced that Britain remains a foreign-occupied country.  This piece erases all doubt.
Posted by The Mound of Sound at 11:46 AM

Interesting post Mound. I agree that the inequity in Britain is truly shocking. My father was born and raised in Central London (near the intersection of Old Street and City Road) and he left because of the inequity and the class system. He had a thick cockney accent and knew that his would always be a disadvantage to him). He hadn't gone back in over thirty years when he died.

British people largely kid themselves that class and elitism are things of the past when in fact they continue to the be cornerstone of British society.

I'm not sure that the British people are still as class complacent as they were in the immediate post-Thatcher years. There seems to be a building unrest with Cameron and his toff Tories. Then again at times it seems all of Europe is poised on the brink of revolution.