Canada Bails Out on the F-35 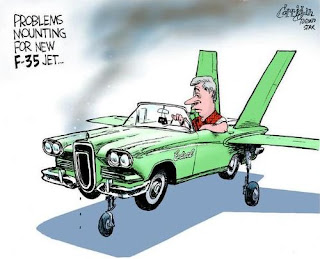 It's over!!!   Canada will not be buying Lockheed's "troubled" light strike bomber.

Faced with the imminent release of an audit by accountants KPMG that will push the total projected life-cycle costs of the aircraft above $30 billion, the operations committee of the federal Cabinet decided to scrap the controversial sole-source program and go back to the drawing board, a source familiar with the decision said. 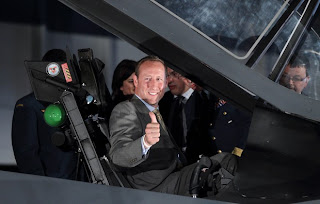 Shit, now what am I going to write about? Oh yeah, stopping the Northern Gateway. What to do now?  How about a real competition where we test all the contenders against realistic, Canadian requirements?   I'm sure Harper can find the blueprint left by Pierre Trudeau when his government selected the CF-18.  It worked brilliantly last time.  It'll work again.

Super Hornet...  Dassault Rafale... Eurofighter Typhoon... Sukhoi 37... take your pick.   My guess is that Harper will try to throw a bit of oil on the troubled waters and go for the American option, the updated Hornet perhaps with some of the electronics suite envisioned for the F-35.

Somebody - or bodies - at Lockheed is going to be having a giant, brown hemorrhage tonight over this.   Canada might just be the nudge that other foreign customers need to follow suit.   Watch... and learn.

It's just too bad that Peter MacKay never got to pull the D-ring on that ejection seat.
Posted by The Mound of Sound at 8:09 PM

Do you have any idea who coined the term "5th generation?" It was Lockheed's PR/Marketing department that came up with it to try to differentiate their not so stealthy light bomber from those other planes that outperform it in every major criteria.

Do you realize that this "stealth" is hard to detect only to X-band radars, not older L-band radars now being built into our adversaries' fighters? Do you realize what little stealth the F-35 possesses is only from the head-on aspect? It is not stealthy to radar from the left or right, above or below, or from the rear. The new Australian radar can pick it up because it can detect air turbulence.

Even U.S. and Israeli defence planners accept that the stealth technology is "perishable" and will be defeated within five to nine years at the outside.

Yes, the F-35 does have some interesting avionics. Best those were transferred to a better performing airframe.