Battlefield: Brain, Yours Quite Possibly 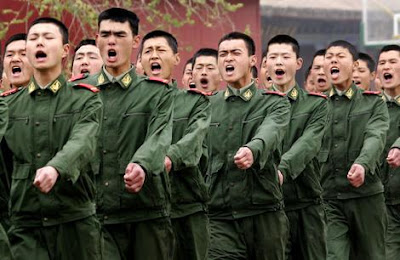 Military researchers are looking for ways to get inside their enemy's brain.   Get inside and stir things up goooood.

This new battlespace is not just about influencing hearts and minds with people seeking information. It’s about involuntarily penetrating, shaping, and coercing the mind in the ultimate realization of Clausewitz’s definition of war: compelling an adversary to submit to one’s will. And the most powerful tool in this war is brain-computer interface (BCI) technologies, which connect the human brain to devices.

Current BCI work ranges from researchers compiling and interfacing neural data such as in the Human Conectome Project to work by scientists hardening the human brain against rubber hose cryptanalysis to technologists connecting the brain to robotic systems. While these groups are streamlining the BCI for either security or humanitarian purposes, the reality is that misapplication of such research and technology has significant implications for the future of warfare.

Recently, security expert Barnaby Jack demonstrated the vulnerability of biotechnological systems by highlighting how easily pacemakers and implantable cardioverter-defibrillators (ICDs) could be hacked, raising fears about the susceptibility of even life-saving biotechnological implants. This vulnerability could easily be extended to biotechnologies that connect directly to the brain, such as vagus nerve stimulation or deep-brain stimulation.

Outside the body, recent experiments have proven that the brain can control and maneuver quadcopter drones and metal exoskeletons. How long before we harness the power of mind-controlled weaponized drones – or use BCIs to enhance the power, efficiency, and sheer lethality of our soldiers?

The possibilities for damage, destruction, and chaos are very real. This could include manipulating a soldier’s BCI during conflict so that s/he were forced to pull the gun trigger on friendlies, install malicious code in his own secure computer system, call in inaccurate coordinates for an air strike, or divulge state secrets to the enemy seemingly voluntarily. Whether an insider has fallen victim to BCI hacking and exploits a system from within, or an external threat is compelled to initiate a physical attack on hard and soft targets, the results would present major complications: in attribution, effectiveness of kinetic operations, and stability of geopolitical relations.

...Regardless of how it will look, though, the threat is real and not as far away as we would like – especially now that researchers just discovered a zero-day vulnerability in the brain.

The aforementioned zero-day vulnerability refers to an experiment in which researchers, using off the shelf BCI apparatus, were able to hack sensitive information from a subject's brain.

And, as posted here a few days ago, the Chinese are also busy working on their own BCI technology.   Who knows, maybe they already got to Harper.
Posted by The Mound of Sound at 10:49 AM