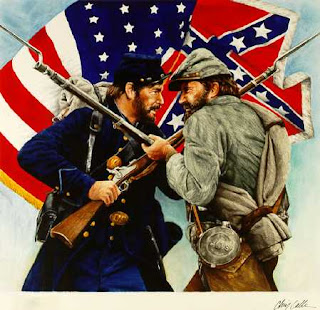 There's one brewing in the midwest, another raging in the southeast and a third building in the southwest.   They're regional, inter-state conflicts over distribution of dwindling groundwater resources.

In the southeast, the Army Corps of Engineers is under simultaneous attack by lawsuits from Georgia, Florida and Alabama, each state accusing the Corps of unfairly giving too much of their shared water resource to the others.  It's a situation that could well worsen quickly as sea level rise begins to impact freshwater reserves including the Everglades.

In the southwest, it's the Colorado River under pressure from several states and which, by treaty, is supposed to be shared with Mexico.

It is in the drought-stricken midwest, America's heartland, that the newest battles are occurring.

The water wars are raging again in America's heartland, where drought-stricken states are pleading for the increasingly scarce water of the Missouri River — to drink from their faucets, irrigate their crops and float the barges that carry billions of dollars of agricultural products to market.

From Montana to West Virginia, officials on both sides have written President Barack Obama urging him to intervene — or not — in a long-running dispute over whether water from the Missouri's upstream reservoirs should be released into the Mississippi River to ease low water levels that have imperiled commercial traffic.

The quarrel pits boaters, fishermen and tourism interests against communities downstream and companies that rely on the Mississippi to do business.

In Oklahoma, they're reporting the drought has leveled off.   It usually does by the time river beds look like this: 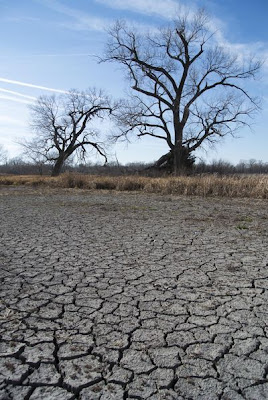 And, in case you thought of drought as a seasonal scourge, think again.  Reuters is the latest to report that the drought that hammered America's midwest this summer is expanding threatening to devastate the winter wheat crop.

Even the region's deer population is being hard hit by drought-related disease.

And in Texas, severe drought is expected again this year and there's already not enough to meet the needs of residents and farmers.


There is drought now extending from the Carolinas to California, essentially coast to coast, from the Gulf to the Mississippi and Missouri river headwaters.  This year that drought extended into Canada.  How many years of this do you think we can handle before something gives?

Wait till we truly start to see the additional results of fracking from The Territories through BC and Alberta. and anywhere in the USA where there's coal seam methane or shale deposits of natural gas or oil.

Water taken/diverted from rivers, lakes.. then after chemical alteration for use in fracking, pumped into holding ponds, to be later deep injected or dumped into aquifers, watersheds, ditches or fields.

The economic benefits of fracking at the municipal or local level are undeniable for employment and small businesses. The tradeoffs are frightening though.

With drought.. additional damage to aquifers, watersheds is unforgivable. What should we think when hearing the water table in the USA, China, India or Mexico is shrinking in their main agricultural areas ? - http://www.treehugger.com/natural-sciences/water-tables-falling.html - Do we think there will not be repercussions ?

Britain is now considering letting fracking be applied across approx 60 percent of their land. What about their water sources? Can they afford the heavy truck damage to their narrow and lightly paved local roads? And how about all the water pipelines-pumping stations for injection and the well to pipeline collection/delivery infrastructure including compressor stations and basic refining or liquefaction? Do they think the gas or oil just magically delivers itself to market?

You're bang on .. the mini civil wars start at the local community level.. and reverberate up to municipal, then state and federal levels .. then they cross national boundaries. Finally we find environmental or drought refugees in 'holding areas' ... and we have no water or grain to support them.. or ourselves.

The way we're headed we're on course for very serious risks to our food security. By neglect we'll be left to struggle with the symptoms having already capitulated to the disease. Our willful short-sightedness is mind-boggling.

Today we seem to be playing with such thin margins in our resource, agriculture and environmental policies. It's a high-stakes, high-risk approach to governance that will inevitably fail.

Have you noticed that, around the world, the fossil fuelers are in a mad rush to flog every possible carbon-based fuel as quickly as they can possibly extract it? Even the Americans, despite the consequences of their decades-long dependency on Middle East oil, are furiously working to begin exporting liquid natural gas. Why? It's not a renewable resource.

Usually "undue haste" is a giveaway, a telltale of an undisclosed backstory at play. In the law, it's actually termed a "badge of fraud."

There are so many cross-purposes being advanced today (the Chinese are the ultimate example) that governance and policy seem to have become permanently estranged from coherence. It's perplexing - and more than a bit frightening.

Its very hard to get a hold of the entire picture re fracking. I'm very interested in identifying the overall environmental risk.
Here's a link you may have seen or read - I came across it via DeSmogBlog ..

- http://www.foodandwaterwatch.org/reports/us-energy-insecurity/ - You can open or download the actual 'report or 'study' .. - an incredible read ! It matched up very well with the seminal articles I read in Rolling Stone re Chesapeake Energy and fracking and Penn State University

Perhaps the most stunning is the work by Wendy Lee, Professor of Philosophy at Bloomsburg University.. Here's the article that really caught my attention and I thought of how this divisive but seductive process and so-called 'patriotism' was headed to Canada - http://www.ragingchickenpress.org/2012/03/17/why-fracking-epitomizes-the-crisis-in-american-democracy-profiteering-and-the-good-american/

I must look into that Badge of Fraud .. thanks !

Because you mentioned it, Sal, here is a pretty good summation of the "badges of fraud."

These are basically "fishy" circumstances, the sorts of things that appear suspicious and can shift the burden of proof from the plaintiff to the defendant. They're sort of an extension of the adage about if something looks like a duck and quacks like a duck and waddles like a duck, chances are its a duck.

I once did quite a bit of fraud work and I have found the litigation approach quite useful outside the courtroom also.

How many vehicles, plastics, cloths made from oil and other detramental products to the environment do you, the commentators on this page purchase?

Anyong, what does that have to do with water or droughts or floods, the subject of this post?

Of course we all use products detrimental to the environment. The best we can do today is to use the most eco-friendly alternatives available, locally made when possible, and reduce our consumption as much as possible.

And you need to clear your head about one thing. We need to stop extracting and exporting high-carbon fossil fuels - coal and bitumen. There's no excuse, no justification for that. We know quite accurately that most of our known reserves of fossil fuels must be left in the ground if we're to avoid runaway global warming and that mandates that we use only the lowest-carbon of those reserves - not coal, not bitumen. There, is that plain enough for you?

We need to stop extracting and exporting high-carbon fossil fuels - coal and bitumen. There's no excuse, no justification for that. We know quite accurately that most of our known reserves of fossil fuels must be left in the ground if we're to avoid runaway global warming and that mandates that we use only the lowest-carbon of those reserves - not coal, not bitumen." "How many vehicles, plastics, cloths made from oil and other detramental products to the environment"...you understood the idea...if it's not produced we don't buy. So, is that plain enough for me?...I guess so..it seems I already had it at the time of sent the first time. Why the confrontation?