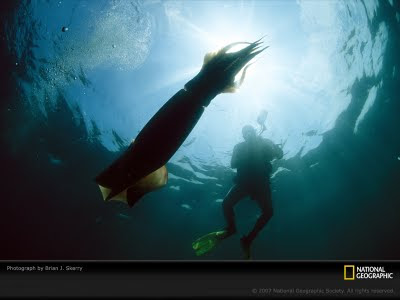 It was mid-August, 2009 that hundreds of Humboldt squid, the terror of the Sea of Cortez, suddenly washed up on beaches near Tofino on the west coast of Vancouver Island.   Nobody knew what to make of it or even how these creatures seemingly migrated from the Gulf of California to the cold Pacific waters of British Columbia.

The migration issue may still be unsolved but researchers believe they may have solved the mass beachings.   Apparently red tides make the mighty Humboldt high as a kite.

Each of the strandings has corresponded to a red tide, in which algae bloom and release an extremely potent brain toxin, Gilly said. This fall, the red tides have occurred every three weeks, around the same time as the squid beachings, he said. (The squid have been stranding in large numbers for years, with no known cause.)

...scientists have proposed that red tides that release a lethal toxin called domoic acid may be intoxicating the squid and disorienting them. But when researchers tested the stranded squid for domoic acid, they found only trace amounts of the chemical, Gilly said.

The poisonous chemical mimics a brain chemical called glutamate in mammals, though domoic acid is 10,000 times more potent than glutamate. The similar structure means domoic acid can bind to glutamate receptors on neurons. In turn, the receptor opens channels that let calcium into the cell. At high levels the poison causes brain cells to go haywire and fire like crazy, so much that they fill up with calcium, burst and die.
Posted by The Mound of Sound at 1:09 PM