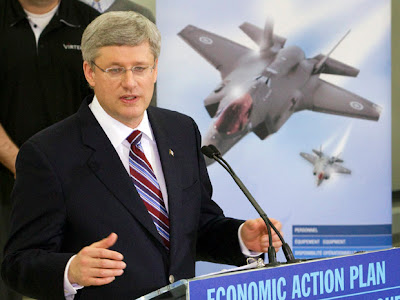 The numbers are in and the big number is 46 as in 46-billion dollars to purchase, arm, fuel, fly and maintain a paltry fleet of 65 F-35s over a 42-year lifespan.

The KPMG report puts the lie to the Harper/MacKay/Ambrose/Fantino fabrication machine.  Yet the number might actually be on the low side.

The KPMG auditors factored in just one-billion loonies to make good aircraft attrition.   That sounds like something in the order of six fighters lost to accidents or other causes over the lifespan of the  airplane.   Given the single-engine vulnerability of the F-35 and the remote areas in which it would usually be operated that sounds remarkably optimistic.

Another inevitable shortcoming in the KPMG report is that the F-35 is still years away from even completing testing.   There's no way to know how viable and expensive will be the fixes that are already known to be needed or how many new bugs will materialize as the testing progresses.   In an exercise that the Pentagon's current procurement chief has labelled "acquisition malpractice" Lockheed put these light bombers up for sale before they were even proven.   That was the American government's harebrained decision, not Lockheed's, and it was a mistake they'll never repeat.

So now DefMin MacKay says we're going into "reset" on the fighter deal and we'll actually have some sort of competition pitting the F-35 against all the other contenders.  That's where the light bomber's deficiencies will become apparent including its sub-par range, speed, agility and payload.   And by the time we actually get around to staging this competition we may realize this "5th generation stealth" business is really mainly smoke and mirrors gimmickry with a very limited shelf life.
Posted by The Mound of Sound at 12:47 PM

Selling Nexen won't give the PM what he needs to purchase the jets.

Canada didn't actually sell Nexen. It belonged to its shareholders. They sold Nexen and pocketed a tidy profit out of it. Canada only approved the sale.