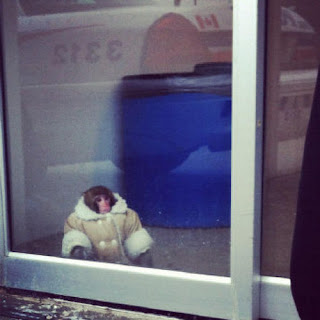 An unidentified member of Steve Harper's inner cabinet has apparently defected.  The partly trained monkey was found wandering aimlessly around a Toronto IKEA store on the weekend. 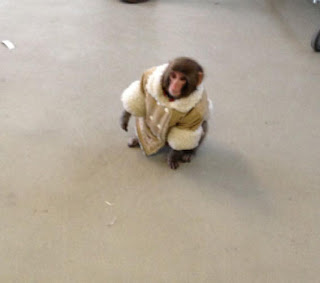 Authorities were able to confirm it was a senior cabinet minister on the run by the standard winter coat issued to Harper ministers and its heavily soiled diaper.

The identity of which cabinet minister this might be remains unknown.  On the rare occasions when these ministers have been known to speak, they all sound exactly like Steve Harper.

Investigators are now trying to discern which minister they have safely back in its cage.   They had thought it was likely Joe Oliver but he's been accounted for in Ottawa.   They next suspected it was industry minister, Christian Paradis, but quickly realized the monkey was far too bright to be Mr. Paradis.  Peter MacKay was ruled out by the fact that the monkey wasn't playing with the poo in its diaper.   The prime minister has had a look but says he can't tell them apart either.   They're all trained chimps to him.

The investigation continues.
Posted by The Mound of Sound at 9:02 AM

I'm sure he knows the party motto: Monkey see, monkey do."

If you lived in Ontario I'd ply you with your beverage of choice until I could get your name on nomination papers.

No, Anon, I don't think you would. It's hard for me to imagine any of today's political parties that would have room for me. The Greens, perhaps, but even that could be iffy.

A poor little lost money being compared with the Harper Government...shame on you!