Is Canadian Progressivism a Farce? 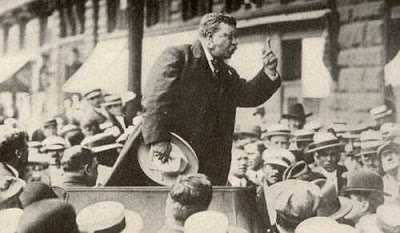 The topic came up recently in a discussion I had with a prolific and thoroughly progressive blogger who will go unnamed.   He lamented that he had become fed up with Canadian prog bloggers who seemed not terribly interested in progressivism at all and, by contrast, far less interesting than their truly progressive American counterparts.

I think his criticism is fair and accurate.   Many of us, I suspect, consider ourselves progressive by virtue of an affiliation with a particular party that once, in times now past, had been more or less actually progressive.   For them, progressivism was a default setting, anything to the left of the Conservatives.   If you were a follower of one of the other parties you were, by definition, a progressive.   Yet surely one doesn't follow from the other.

American progressivism operates outside of the country's governing parties.   That's because the Democrats are only slightly less distant from progressivism than the Republicans who, at times, act as though they would like to see progressives tried and burned at a stake.

What would a progressive Canadian political party look like today?  Among other things it would be championing causes like dismantling corporatism, scrapping the petro-state we have so foolishly become, and busting up the corporate media cartel to restore press freedom in Canada.   All three of these things are like malignant tumors metastasizing in Canada's body politic, eating away at our once cherished democracy.  A progressive party would be promising to redress inequality and not just inequality of income and wealth but, more importantly, inequality of opportunity - the real scourge that threatens the future for our kids and grandkids.  That means restoring and bolstering health care and public education, the very cornerstones to rebuilding a vibrant, robust middle class.  A progressive would be committed to restoring collective bargaining rights to our economy.  A progressive would release the ties that bind us to America's dead-end militarism.

I'm beginning to think I sound like David Lewis or Ed Broadbent yet I've always considered myself centre-left on social issues and decidedly centrist on everything else.   I don't think I've changed.  To confirm that I have gone back to read  Abraham Lincoln, Teddy Roosevelt and FDR, two Republicans and a Democrat, all of them exceptional American presidents who served at critical moments in their country's history.  Were they a gang of closet Socialists?  I think not yet we would have to move our non-Conservative parties of today well to the left to bring them into line with Abe and Teddy and Franklin.

As a progressive it seems obvious that we need a reformation in Canadian politics.  We need to even the keel.  That can't be achieved by Tony Blaired New Democrats transforming into Latter Day Liberals or by Liberals continuing to morph into Conservative-Lite.   That only keeps Canada listing to the right and there's no good for our young and future generations that can possibly come from this.
Posted by The Mound of Sound at 11:41 AM

Nothing good will come to this country, as long as Harper is in office. He is a Dictator, destroying our Democracy. Our Civil Rights and Liberties have been taken from us. Our Freedom of Speech is under attack. Even our Human Rights are being eroded.

Harper and his Cons have been a litany of, lies, deceit, thefts, corruption, dirty tactics, dirty politics and Harper cheated to win the election.

Most Canadians say, Harper has no right to be in office because, he cheated to win the election, with his robo-call scam. Harper is now busy, cheating his way out of his election fraud. He is denying other Politicians of their rightful election wins. He is denying Canadians their votes.

Harper is every bit as hateful as, Stalin, Hitler and Mussolini. All dictators, have the same typo personalities.

You're completely missing the point, Anon. Yes Harper is a shit. We know that. The opposition should be clobbering him. They're not. As they draw increasingly closer to the right it gets harder to distinguish themselves and harder to land punches.

Do you think there are Liberal leaders who wouldn't do deals with the Chinese on Athabasca? Do you believe Mulcair would say no to China if it meant the collapse of private capital investment in the Tar Sands? Perhaps you do. I don't have the slightest confidence in Mulcair, Trudeau, Garneau or Hall Finlay to keep our bitumen resources out of Chinese control.

Have you heard Mulcair or any Liberal contender vowing to dismantle the corporate media cartel? None of them will touch it. Far too risky.

They all pay lip service to the environment and climate change yet they betray their deceit by happily promoting the filthiest petroleum resource on the planet.

They're all a rotten bunch and not one of them has the sand to do what's right for Canada. Harper has them all cowed and the Canadian public knows it.

On "Do you think there are Liberal leaders who wouldn't do deals with the Chinese on Athabasca?"

Right on! And our young Lib Leader, Justin, has illustrated that point just as I thought he would,saying it's OK that Canada's economy could be even further owned by foreigners than at present, and he left the point at that - no caveat. As someone said, JT is Just(in) Harper with a smile... and a smile ... and a smile...etc.
However here`s the problem: how do we force the tar sands companies to clean up their mess at Athabaska and Fort Mac, when they fully plan to walk away from that mess? ... just as Electromotive took taxpayers' money and walked away from their promise to continue to provide jobs in London, ON? When we "little people" break a promi9se to the government, we could go to prison for breaking it. When big corp'ns do it, they just ignore the matter, the justice dept. ignores the matter, and those of us who complain about it could be charged with "causing an annoyance (to the corpns)", irritating our "trading partners", as Jim Flaherty would say!

Andrew Nikiforuk addresses this in his book "Tar Sands." The existing deal with the Alberta government requires Athabasca operators to post something in the order of 5-10% toward the actual cost of site remediation.

One way to dodge the bill is, at the end of the operation, to sell the asset along with the clean up liability to a shell company that then closes shop.

Already some Athabasca operators are gaming the system. Instead of those oft-repeated promises about restoring their open pits to their natural state, they're now talking about letting them become artificial lakes in the hope that, in about a century, they'll become fit for animal and human use.

Can you imagine giving a bank robber a century head start to get away?