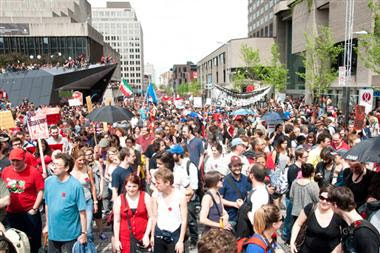 Canadians are quietly simmering.   A poll finds a majority of Canadians now support grassroots protests as a vehicle to force political action.

The majority of respondents said they supported grassroots protests, including the Occupy movement and the British Columbia referendum against the harmonized sales tax. People are looking at other methods of political participation beyond conventional parties, said Environics pollster Keith Neuman, in an interview discussing the poll on Canadian values conducted jointly with the University of Alberta.

Also, when it comes to taxes, the poll suggests politicians are out of touch with Canadian values, adds U of A’s Harvey Krahn, a sociologist who assisted with the poll. It was conducted from Oct. 2 to 14 with a sample size of 2,001 people.

Keeping taxes as low as possible ranked last on the list of 12 shared values identified by Canadians, yet politicians, including Alberta Premier Alison Redford last week, staunchly rule out increasing taxes even when the province faces a serious deficit, said Krahn.

“There’s a disconnect between Canadians’ values and politicians on this issue,” said Krahn.

The poll also identified 12 basic values supported by more than 50 per cent of Canadians. At the top of the list, with more than 90-per-cent support was “having a political system that encourages average Canadians to let politicians know what they think” — a value that speaks to support for Occupy and other citizen movements, said Neuman.

When asked if Canada should be a country that supports gender equality, more than 90 per cent said yes. Also garnering more than 90-per-cent support were public health care and respect for all religions.

If this poll is accurate it would seem to suggest that the opposition parties' shift to the right has been a monumental blunder.   Harper has certainly taken the country there but, unlike the Liberals and the NDP who compliantly followed, the Canadian people, it seems, have stayed put which could plausibly explain the public disconnect with federal politics and the growing support for dissent and protest.

This should be a lesson, especially to the Liberals now looking for their next leader.   With Trudeau,  Garneau and Hall Findlay parked so comfortably up Harper's bitumen backside, it's time the LPC came to its senses and finally embraced a good measure of progressivism.
Posted by The Mound of Sound at 6:32 AM