We Can't Pretend Any Longer 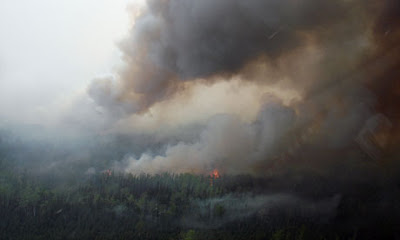 The tundra is burning.  Coupled with retreating glaciers and loss of Arctic sea ice, we now have three global warming feedback loop mechanisms that are plainly visible to the naked eye from space.

This is not the face of man-made or anthropogenic global warming.   No, we pulled the trigger but the Earth did the rest.  And now we're pretty much powerless to stop any of it.   We can't stop the tundra from burning, releasing greenhouse gases, spreading soot to northern ice caps and exposing the permafrost underneath, itself a rich source of massive quantities of once safely stored greenhouse gases.   We can't stop that and we're not even pretending we have that under control or that we're going to do anything about it.  Instead we just talk about something else, anything else.

Actually we're doing more than talking.   We're in a furious race to extract any fossil fuel we can pump, explode, boil or mine out of the ground.  We're eying the loss of the Arctic sea ice not as a disaster but as a terrific opportunity to extract fossil fuel energy from beneath the sea bed.  It's as though all this fossil fuel, that has lain safely buried beneath our feet since long before the appearance of man suddenly has a best before date and the clock is ticking.

The Americans have suddenly discovered new sources of oil and gas, potentially greater than the oil fields of Saudi Arabia.  It still won't be enough to relieve them of their entire need for foreign oil but it could come a long way to self-sufficiency.   So, what is the buzz in the States?   Exporting.   They want to export their windfall, especially the least carbon-intensive stuff, the natural gas.

As The Tyee's Andrew Nikiforuk revealed in his expose on the Nexen deal, the fossil fuelers are now in desperation mode.

"In language that no petro politician would use, the Journal boldly announced the obvious: Canada's bitumen was "suddenly, not a sure thing." Or even a smart one. The boom was over.

"Harper's disregard for democratic sentiment on these issues (Canadians and Albertans in particular remain opposed to a CNOOC sell-out, let alone the trade deal) ultimately spell one word: desperation. And desperation in a bust and boom petro state, as any North African can tell you, is not a pretty thing."

It's a feature common to warfare that the gunfire reaches a crescendo in the minutes before a cease-fire comes into effect.  Is something similar happening with fossil fuels?   Are the fossil fuelers and their political minions at last coming to realize they're caught up in a volatile and high-risk fossil fuel bubble?  Are they finally figuring out that all those reserves on their books are woefully sub-prime assets?   Is this a giant "going out of business sale", an "everything must go" petro-bacchanal?

If Nikiforuk and others, who've been warning us about this bubble for a good long time, are right then Canada and especially Alberta are in trouble.  Despite all its supposed Tar Sands wealth, the Alberta government is running in the red.  Now why would that be?   Could it be high unemployment?  No.  Well, it must be something.

So, with the North warming, the ice melting, the tundra thawing and burning, is this really a good time for a national blow out sale on fossil fuels?   What does this say about us?   What does it mean for our future and that of our children?

Isn't it time our political classes had an adult conversation with us?  Wouldn't it be nice if they would explain how their energy policies are to be brought into conformity with our environmental imperatives?   Tundra fires tell us something, that we have the cart ahead of the horse.
Posted by The Mound of Sound at 10:23 AM

The children are in charge, Mound. They truly don't know how to have an adult conversation -- and we are in deep, deep bitumen.

They are in the monetary red because they have not demanded more revenue from the sale of our resources...a mere 20% does not get it. What of Newfoundland sitting here in the Atlantic, supposedly a have province from the revenues of off shore oil....every bit of oil mostly dragged to the surface by ExxonMobile is transported to the US. It is only the Avelon Peninsula benefiting from secondary revenues. When the oil is gone, Newfoundland will be back to where it was before oil including the overture to the second Churchill Falls debacle. They will all be rubbing their heads and wailing...what happened? which is what Alberta is now doing. Canada is no Norway that is for sure when it comes to at least making money for the future.

Why on earth would you think Alberta receives a 20% royalty? It's nothing of the sort. You should read Nikiforuk's book "Tar Sands" to get the real figure and then see how it is further reduced via subsidies, deferrals and the inevitable cleanup that will be left to Ottawa and the provinces.

There are other reported sources other than "Tar Sands" by Nikiforuk. It was recently reported in a local paper here the revenues from the sale of oil in Alberta was 20%....GROSS. I am not stupid enough to think there aren't other subsidies, deferrals cleanup, and Ottawa's take from that amount that lowers that percentage.