The People's Republic of Athabasca? 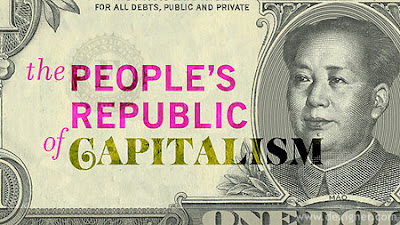 Figuring out what's going on and what lies ahead for Old Beelzebub and his cherished Tar Sands is like casting bones and reading entrails.

For months there have been warnings that the Tar Sands were in trouble for a variety of reasons but especially because of the shale oil and gas boom that developed in the United States.  It only made sense.  Why invest in $70-a barrel Athabasca heavy crude when you could put your money into $50-a barrel U.S. prime, shale oil?  When word got out that America was sitting on a glut of shale oil and shale gas, Athabasca's fortunes worsened.

What were the politics behind Steve Harper's decision to approve China's takeover, perhaps bailout, of Nexen?   Who was Harper really working for - Nexen shareholders, Beijing, Alberta?  The real beneficiaries appear to be buoyant former Nexen shareholders, who pocketed a handy 60% premium on their shares, and the Communist Chinese Politburo who got their hands on 300,000 acres of prime Athabasca Tar Sands and other oil assets.

On a Friday afternoon, too late for the papers' news cycle, Harper announced the Nexen approval as a one-off deal, one time only, never to be repeated unless in "exceptional circumstances."

The report said something telling.   No one will touch us except the Chinese.   The Beijing government's capital, described as "abundant and patient", is the only game in town now that the Americans are taking their money elsewhere.  It sounds as though the Americans have lost interest in controlling the Tar Sands while China is still willing to pay a premium to achieve the same thing - control of Canada's major petroleum asset.  At this point, it's about control not investment.

Harper's options are bad and trending worse by the day.   Does he approve a Chinese rescue of the Tar Sands and cede control of Athabasca to Beijing?   Does he refuse and risk a possible devastating flight of private capital?   Does the federal government itself step in to bail out Tar Sands operators with high-risk investments of taxpayer dollars?

The optics of Ottawa returning to the Tar Sands would be horrible for the Conservatives and would win them few friends outside Alberta.   Imagine Flaherty, having just said there's no money for Canada Pension improvements, then writing cheques for scores of billions of dollars to pour into our already sub-prime fossil fuel bubble.

Tar Sands development depends on two things - high world prices and an awful lot of investor confidence.   When you're the most expensive oil on the planet, investors need confidence in a healthy return.   When they see the Oil Barons taking to the lifeboats and firing flares into the night sky, it's not confidence building.  When the Barons admit they're "vulnerable" they're saying their ship is sinking.

When it comes to the vulnerable Tar Sands, Chinese State-Owned-Enterprises aren't like oil companies.    It's a bit like comparing a bank to "Payday Loans."   They'll put up money but its more than oil they're after in repayment.

Not only are the Tar Sands vulnerable, so too is Canada.   We're saddled with a prime minister who has an established track record of never seeing what's coming.  He can't read the signs, especially the warning signs.   The degree to which he was caught unawares by the 2008 global meltdown should have taught us everything we needed to know about Steve and vision.  Worse yet, the guys on the other side, the Chinese, have in abundance all the qualities that Steve lacks.  To them, Canada's leader is about as impressive as a won ton.

Prepare for boarding.
Posted by The Mound of Sound at 9:33 AM

Scary shit, MOS! But what in the hell can anyone actually do? As you've often pointed out neither the Con-lite Libtards nor the new opposite of improved NDP seem to be anything more than a slightly less offensive option..........other than outright rebellion (which hasn't gone well in the Great White North - law and order is the order of the day for the little people) is there any productive course of action?

I really don't know, Koot. In the span of just a couple of decades Canada has degenerated into a true petro-state. We have come to believe our future lies in foreigners digging prehistoric carbon remains out of our ground. We're desperate and can't imagine having to live without that one resource even through we're a country of such vast resources.

At times it seems as though our commitment to fossil fuels is an admission of our own failure.