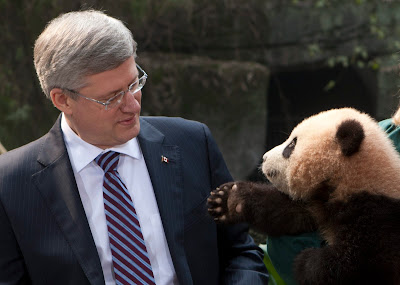 Harper has a choice.   He can transform Athabasca into a state-controlled, state-run fossil fuel resource or he can kiss goodbye to his twisted dream of fossil fuel superpowerdom.

The Athabasca Tar Sands are running out of steam - literally.   There's simply too much shale oil and gas coming on line to make Athabasca bitumen alluring to new investors.   Without capital there won't be the major expansion of bitumen production Harper has hinged all of his plans, his dreams on.

It's not the first time Athabasca has floundered.   Many decades ago it seemed a sure thing with American Big Oil lined up to go in - until abundant conventional oil was discovered at Alaska's Prudhoe Bay and the Tar Sands were dumped.

Desperation and insanely high world oil prices breathed new life into the Tar Sands, aided and abetted by low royalties, deferrals, subsidies, labour concessions, tax breaks and deferred environmental obligations.   As avowedly free enterprise governments up the ante of corporate welfare to Tar Sands operators, the bitumen trade came alive.   Sure it was a conjuring act but it gave the appearance of wealth in abundance into the distant future.

The true future of the Tar Sands began emerging when science figured out the maximum CO2 carrying-capacity of the atmosphere if humanity is to have any chance of staying within the 2C danger limit.   We knew how much atmospheric CO2 was already up there.  A (maximum carrying capacity) minus B (what's already up there) equals C (the remaining usable capacity).

After running the numbers it was time to look at known fossil fuel reserves already logged into the books of the fossil fuelers.   Oopsie.  They had five times as much fossil fuel as could safely be burned.   That meant four-fifths of known reserves would have to be left in the ground forever or at least until we could come up with some way of siphoning atmospheric CO2 out of the air on mega-industrial levels.

Now if you've got five of something but you can really only sell one of the five then the actual value of that one-fifth really plummets.   You're in an economic bubble marked by vastly inflated prices.

The Tar Sands, however, is utterly dependent on bubble prices.  It's massively expensive to extract, upgrade, refine, and transport, even leaving the clean-up costs out of the equation.   And it's better only than coal as a high-carbon fossil fuel.  It's dirty, dirty, dirty which means costly, costly, costly.   Expensive and dirty, oh dear, not exactly big selling points in a market awash in fossil fuel.

Money knows the difference between a good deal and a bad deal.  Money follows the good deal.   That's where the recent revolution in American shale oil and gas production comes in.   That's the good deal against which Athabasca bitumen is measured.  American shale oil has a $20 a barrel advantage over Athabasca bitumen.  It's the competition.  It's the Prudhoe Bay of the 21st Century.

Suddenly America's once ravenous appetite for Athabasca heavy has waned.   For many good reasons the Americans like their home grown stuff better.  But their changing fossil fuel appetites translate into diminished capital investment in the Athabasca Tar Sands.

There's still money coming in to Athabasca but not nearly enough to fuel Harper's dream of massive expansion of bitumen production.  The Nexen shareholders must have seen the writing on the wall when Beijing came knocking, offering them a take-out deal.   They went for it, needing only the Godfather's blessing that Steve Harper sheepishly gave while promising the Canadian public this Chinese takeover business would never, ever, not ever happen again.   But those attuned to listen for weasel words caught Harper's qualification - no more Chinese government takeovers unless in "exceptional circumstances."

In yesterday's Financial Post, the Oil Patch cried "uncle" and pleaded "exceptional circumstances" for the whole damned Athabasca bitumen pit.   The message was blunt.  The Tar Sands are in trouble.   They've vulnerable.   They're in desperate need of "SOE" (State Owned Enterprise) capital.   They're pleading for government ownership only not Canadian, not that awful Liberal kind, but Chinese as in Communist China, the People's Republic Whereof.   Now there's an outfit Big Oil can deal with, the Beijing Politburo.

"The need for massive amounts of capital, skyrocketing costs, the exposure to oil price volatility, the technological and environment issues, the competition from shale oil, severe pipeline bottlenecks and political opposition in Canada and the United States are just some of the challenges which will ensure that ‘exceptional circumstances’ will guide most future government decisions regarding the oil sands,” Pierre Fournier, geopolitical analyst at National Bank Financial said in a report.

“The CNOOC-Nexen decision is an essential step in guaranteeing the future development of the oil sands. While significant challenges remain, the view that the Canadian government has effectively put an end to foreign SOE participation in the oil sands will not and should not survive the test of time.”

So it seems Steve Harper has set Canada on a course to increased Chinese ownership, possibly eventual Chinese control, of the Athabasca Tar Sands.   Those who think that's probably not such a bad idea should explore how China cornered the Pacific Rim coal markets more than two decades ago.   Australia, Canada and others got suckered into that deal.  It all sounded really great until China achieved a market control position and was then able to drive down prices.   The Athabasca business seems eerily similar.

Like the National Bank analyst I can't see Harper saying no to the Chinese government takeover of Athabasca bitumen ventures.  He's already crossed the Rubicon.

I think the Chinese are playing a long game. In 20-30 years, the conventional and shale gas-oil will be mostly depleted (despite the more optimistic predictions).

The Chinese will control the tarsands, and thus the bitumen that can be processed and refined for diesel and JP4 (jet fuel). And what will diesel and JP4 power? The tanks, trucks and aircraft of a military force (the navy will be nuclear powered).

Farfetched? Perhaps. But whatever the case, the checkers playing Harper has been outmatched by some chess masters.

I agree with your take, Anon. China sees a geo-political dimension to fossil fuel capture to which Harper is either oblivious or indifferent.

Look at Cheney's motivation to cajole Bush into the conquest of Iraq. The neo-cons didn't seek outright ownership of Iraq's oil resources. Their Holy Grail was "control" of those resources. It was control, they believed, that would empower them to allow or deny access to Iraqi oil and to regulate production.

The same element of control has always been in the background of America's ambitions in Afghanistan. There the focus has been on the fossil fuel riches of the Caspian Basin, securing them for Europe and simultaneously preventing them from falling under Russian control. The more control Russia can gain, the more its influence with Europe increases and the more America's declines.

China understands the global control game just as well. This is why it is moving to bring Pakistan and Iran into the orbit of the Shanghai Cooperation Organization. That could facilitate a direct, overland route to Iran's oil as well as blocking the American TAPI pipeline access to the Indian ocean.

All of this is apparently lost on Harper and Alberta.