Tell Them All - We Want Our Canada Back 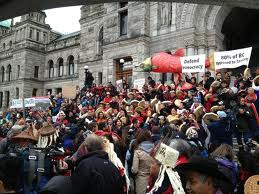 As the year draws to a close I fear for the future of our country.

Our degeneration into a petro-state has exacted a heavy price on Canada and our people and what we can hope to be in the difficult years that lie ahead.  It is as though we can no longer afford to do what is right and good.

We were once respected around the world for our fairness and commitment to peace and resolution.   Now we're respected in corporate boardrooms and on generals' plotting tables.  We have "stepped up to the plate" and joined the Big Boys in whacking the living Hell out of the little boys.

It passed my mind the other day that had today's Canada existed in the 60's, we, like the Australians, would quite possibly have joined America to war in Viet Nam.   And, like the Americans and Australians, we would have fought and killed an immense number of people to achieve absolutely nothing.

Nothing so much as that goddamned F-35 reveals this to be our mindset today.   We have become so enmeshed in American militarism that we are even willing to call this light attack bomber a "fighter."   Why do we call it a fighter?   Because that legitimizes the damned thing.   That means we don't have to acknowledge that we are becoming a nation of attackers.

The F-35 is NOT A FIGHTER.   A fighter does many things.  It patrols.  It defends airspace.  It supports troops in combat.   It is an interceptor, an air superiority fighter, a ground attack fighter and, when needed, a light bomber.   The F-35 is not an interceptor.  It is not an air superiority fighter.   It is not a ground support fighter.  It is a light, attack bomber.

When you buy the F-35 you effectively outsource your defence policy and much of your foreign policy to another country, in this case the United States.   It is, after all, only the USAF that operates that highly sophisticated and massively expensive support aircraft the F-35 will require should it ever be sent into combat.   These support aircraft - AWACS, JSTARS, Rivet Joint, Cobra Ball, Combat Scent and others such as F-22 stealth escort fighters and aerial refueling tankers provide the umbrella beneath which the F-35 will attack vital Chinese targets.   Did I say "Chinese"?

Curious, isn't it, that we're outsourcing our defence policy to a country, the U.S., that isn't walking but running away from our bitumen bounty and adopting that very country's aggressive military posture against another country that may be the last, best hope for our petro-state, China?   Nothing blatantly incoherent in that, is there?

But political coherence is only truly relevant in a democracy.   Non-democratic forms of governance, such as oligarchy, are less troubled by such things precisely because they serve a narrower and more fragmented set of constituencies.   Democracy is supposed to be about the people, now and in the future.   Oligarchy is about some people and the future is heavily discounted.

I'm convinced we have never endured a Parliament, on both sides of the House of Commons, less concerned about the future than what we have today.   They all embrace our nation's trade in the most carbon-intensive, ersatz petroleum on the planet.   They even call it "ethical oil."  It's about as close to ethical as the F-35 is to being a fighter.   But in our Brave New Canada these are mere trifles.   Reality need not obtain. 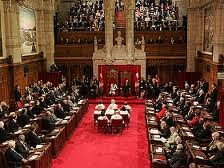 Almost 90% of us support protecting the environment "even if this slows down economic development."   Out of 12-stated values raised by the pollsters, lower taxes came dead last.   Last, dead last.

The dreadful truth revealed by the survey was that federal politics is no longer about serving the Canadian people but targeting narrow segments of the population with vague messages calculated to manipulate their support.   The political classes have broken faith with the people and, by that perfidy, have forfeited their very right to govern us.

We want our Canada back.
Posted by The Mound of Sound at 11:17 AM

Scores of Canadians have no doubt, Harper cheated to win the election, with his robo-call fraud.

Harper's behavior is so bizarre, his sanity is being questioned?

Harper is giving Canada to Communist China. He has given Red China our resources and resource jobs. Harper has permitted China to sue any Canadians, blocking China's takeover of Canada.

Red China sued in BC, to take the mining jobs. BC miners must speak Chinese Mandarin to obtain those mining jobs. As we all know, BC is an English speaking province.

There are seven new mines, going into Northern BC. Some owned by Communist China. There are also mine expansions.

During Gordon Campbell's reign of terror. He worked for Harper, and still does. He too gave BC'S resources and resource jobs to Red China. China was already sending their people to school, to learn 100 English words to take BC mining jobs. Harper and Campbell plotted China's takeover, a long time back.

CSIS warned Canadians of Red China's huge inroads into Canada. BC was specifically named because, Campbell was already selling BC out to Communist China.

As hard as the BC people tried to warn everyone, Harper is a snake in the grass, no-one listened to us. We saw this sell-out coming, a long time back.

Any province that does have a lick of sense? Will get the hell out, of Harper's Canada. However, they won't listen to that either. People are stupid enough to think? We must keep Canada intact, so Harper can deliver all of Canada as one packet to Red China, served up on a silver platter.

No doubt, when Harper gives the rest of the tar pits to China, we will have to speak Chinese to work there too.

Well said!
2013 is the year we must rescue Canada from those who see it foolishly & simply as an economic resource to be plundered for short term profit for corporate shareholders.
It's our country and we want it back!