National Rifle Association boss Wayne LaPierre has sparked a backlash of anger and ridicule at his suggestion that the solution to schoolhouse tragedies like Sandy Hook is more guns at schools.

The response was forthright from editors and opinion writers. "CRAZIEST MAN ON EARTH" was the New York Daily News' verdict, noting that the "NRA nut blames everyone and everything EXCEPT the GUNS".

The New York tabloid is currently embarked on a campaign to get Washington to put in place a ban on assault weapons.

Its response to last week's tragedy is in directly opposition to that of LaPierre, who called for armed guards to be put in place at every school across the US.

"In Wacko Wayne's world, the only answer to death by guns is to flood the country with more guns and stand ready for the shootout. His zeal is worse than nuts; it's a peril to life and limb," the Daily News said in an editorial on the NRA press conference.

The New York Times likewise found it impossible to hide its contempt. In its main editorial, the NRA executive vice-president was attacked for his "mendacious, delusional, almost deranged rant."

In Connecticut, the Hartford Courant responded to LaPierre's NRA with this: 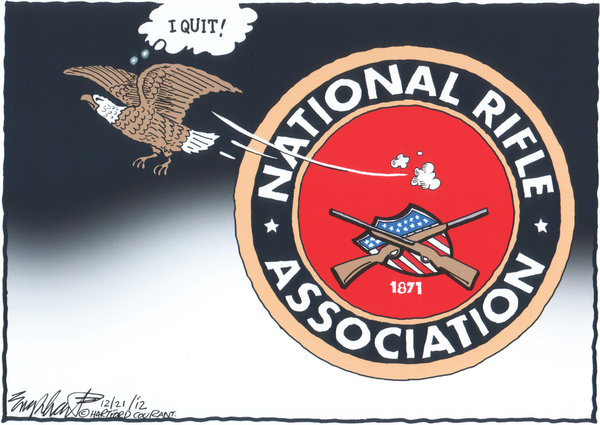 What can a person say...it's nothing short of paranoia. The US is the only democracy is the world that allows its citizens to carry around war weapons...something not right about that. Merry Christmas

Apparently LaPierre doubled down this morning on Meet The Press prompting the host to take him to the woodshed.

And a Merry Christmas to you as well, Anyong.