The F-35, Should Canada Sit This One Out? 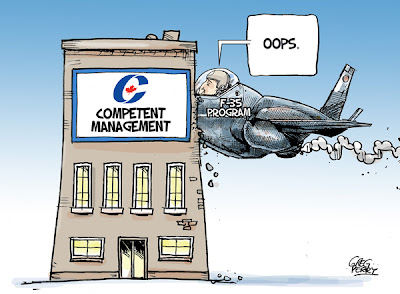 Maybe Canada should just give the F-35 a pass and wait for something a lot better.   Like the Aussies and US Navy we could opt for a proven, capable, reliable, affordable alternative, like some new F-18s and sit by while America's next-generation technology works through its considerable teething problems.   It even seems that the F-35 and its vaunted "5th Generation Technology" may be on its way to a premature passing to make way for 6th Generation warplanes.

"...the U.S. military is laying plans for what it is calling a “sixth generation” aircraft to replace the F-35 as early as 2030.

" At a recent meeting at the Center for Strategic and International Studies in Washington, D.C., Gen. Mike Hostage, chief of the U.S. air force’s combat command, provided more details on the plane his organization wants to buy. The sixth generation aircraft would not be a drone and instead would be flown by a pilot. The air force would need the new plane around 2030 and it will be equipped with what he called “game-changing capability,” he noted."

Some question whether Canada needs a fighter capability at all.  The standard question is "who are we going to fight?"  The obvious answer:  "I don't know, they haven't told us yet."   We don't get to dictate who we fight or when.   Some countries do that, Canada doesn't.   Events beyond our control usually dictate who we wind up having to fight and sane people accept that we don't always get a choice.  Even the Swiss and Swedes know that any country that wants peace had damned well better be prepared for war.  Even neutral countries don't take their security for granted.

Those who actually know about these things believe there is a real likelihood that most, if not all, countries will be confronted by more conflicts this century than we have known over the past half century.   There are a lot of destabilizing forces in play and they're escalating although they differ from region to region.   Everything from climate change to overpopulation, population displacement, food insecurity, water insecurity, resource depletion and exhaustion, terrorism and nuclear proliferation, all present security threats of a global dimension.

Countries like our own may be compelled to invest significantly more in defence than we have in generations.   That makes it even more critical that we invest wisely and for what we need, not what someone else wants us to have.

The F-35 introduces a host of new technology that needs more time to sort out than Canada can afford to wait.  If we want those technologies it's probably best to get them when they're matured, proven and reliable.   The F-35 remains far too mired in "trial and error" development.

For now we need to come up with a replacement for our aging CF-18s.   New, upgraded F-18s would seem the logical, affordable option.   The F-35 isn't ready, we're not ready for the F-35 and we can't afford to get boxed into a big mistake.