What Would Diefenbaker Make of Steve Harper? 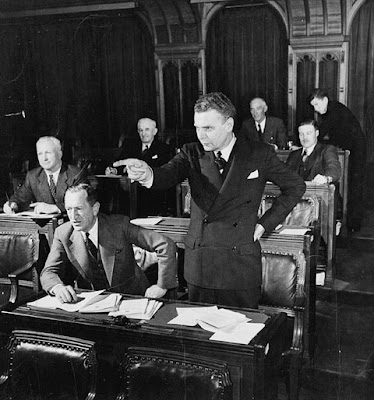 I was just writing a Conservative friend about the Nexen/Athabasca fiasco when a terrible thought crossed my mind.

I imagined what it would be like if "The Chief" John Diefenbaker was alive to witness Steve Harper's sell-out of Canadian resources and jobs to China's Communist masters.   What would old John make of what Harper has done to his Conservative party?  What would he have to say about Harper's collaborator and fellow sell-out, Peter MacKay?

While he was still in Parliament, I managed to spend some time with Mr. Diefenbaker in his office on various occasions discussing this and that.  I liked him and, for all his flaws, saw much in him to admire.   Above all else I saw in him a dedicated and genuine, fellow Canadian.

John Diefenbaker would have no truck with the Beijing Communists.  He was a fierce champion of rights and democracy.  He was an advocate of civil liberties of the sort unknown in China and unwelcome in Harper's lair.

I suppose what he might find most galling was the way Harper has tried to falsely cloak himself in the memory of John Diefenbaker.  I would surely like to hear what The Chief had to say about that and I'll bet it'd be fiery.
Posted by The Mound of Sound at 5:21 PM

I thought of this pic when I read your post.Sask Premier Brad Wall & Harper under the stern eye of the Chief

Great picture, Dog, thanks. I think Dief would take them both to the woodshed.

Dief ruled before I came to Canada, but it would seem to me the most Harper like deed he performed was the cancellation of the Avro Aero - that is the only part of his legacy that Treasonous Stevenous has chosen to imitate.