The Massive Millstone Round America's Neck 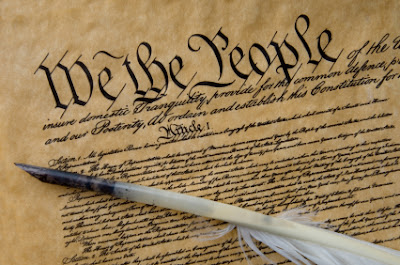 Fanaticism dooms Americans.   As a people, Americans hold and are held captive by fanatical, irrational beliefs.   The most terrible of these is the common conviction that their Constitution is sacrosanct.

The Guardian's Jonathan Freedland argues that tragedies like the Sandy Hook shootings lie squarely at the feet of Americans' obsession with their constitution:

To outsiders, the point seems so blindingly obvious: more guns equal more death. In Britain, where gun laws are strict, the annual number of gun-related murders stood, at last count, at 41. In the US the equivalent figure is just short of 10,000.

Whether it's Britain, Japan or Australia, the evidence is the same: strict gun control means fewer people die. American unwillingness to face this basic arithmetic – preferring to blame the mental health system or videogames or the "feminisation" of the classroom, as one conservative pundit did, or the absence of religious prayer in schools – the explanation of former Republican presidential candidate Mike Huckabee – rather than the most obvious culprit for all this gun violence, namely easy access to military-grade assault weapons, can drive outsiders to distraction.

...If you really want to know why the US can't kick its gun habit, take a trip to the National Archives in Washington, DC. You don't even have to look at the exhibits. Just study the queue. What you'll see are ordinary Americans lining up, in hushed reverence, to gaze at an original copy of the United States constitution, guarded and under heavily armoured glass. It is no exaggeration to say that for many Americans this is a religious experience.

It is indeed a sacred text. Despite, or perhaps because, the US is a country animated by faith, the "founding fathers" are treated as deities, their every word analysed as if it contained gospel truth. Any new idea or policy proposal, no matter how worthy on its own merits, must be proven compatible with what those long-dead politicians of the late 18th century set down – otherwise it's unconstitutional and can be thrown out by the supreme court, the high priesthood selected to interpret what the great prophets of Philadelphia intended.

...[The Constitution's] system of checks and balances is mathematically and beautifully precise in its determination to prevent unfettered, over-centralised power. It represents the unfinished business of England's own incomplete revolution of 1688. It's no exaggeration to say that this single document makes the US possible, cohering an immigrant nation with no common bonds of blood or soil around a radical idea.

But when the attachment to that text calcifies into a rigid dogma, danger beckons. Even the best ideals can become warped: note how the first amendment guarantee of free speech has allowed unlimited spending on TV campaign ads by anonymous corporate donors. In the case of the second amendment, a constitution designed to be a document of liberation instead imprisons the US, shackling it to an outdated rule that makes easy the murder of schoolchildren. Polls show a majority of Americans favour greater gun control, but the US constitution stands stubbornly in their way. The scholar Daniel Lazare describes America as "the frozen republic", chained to decisions taken when the right to bear arms meant the freedom to carry a musket. He wants the US to revamp its constitution, like most of the other countries of the world: "Why must Americans remain slaves to the past?"

...America need not be frozen. On the contrary, it was founded on the ideal that each generation is able to make the world anew.
If Americans truly want to see an end to horrors like the one that took the children of Newtown, they ought to heed the words of that great British-born hero of the American revolution, Thomas Paine: "The circumstances of the world are continually changing, and the opinions of men change also," he wrote. "Government is for the living, and not for the dead; it is the living only that has any right in it."