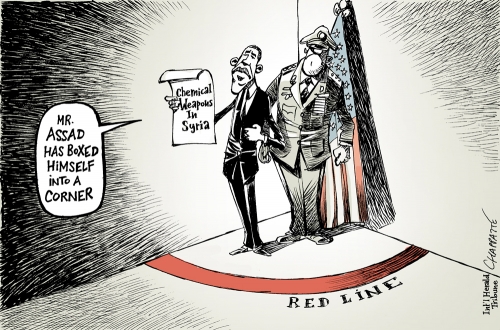 Anyone skeptical about the wisdom of an American attack on Syria should consider the options sketched out by former Obama deputy assistant secretary of state, Suzanne Nossel.   Seriously, this sounds like war waged by playground rules.  It begins with a show of force, a cruise missile strike.

What happens afterwards, though, is anybody's guess.

"They don't want to do something that could look like an empty gesture," says Suzanne Nossel, who served as a deputy assistant secretary of state during Obama's first term.

"They'll wait for a reaction. Does Assad step it up with the rhetoric - 'you failed in Iraq, you failed in Vietnam'? Or does he take the beating?"

If the Assad regime decides to ratchet things up, Mr Obama has an array of options - none of them good.

"The range is, you do nothing - all the way up to large-scale air and ground campaigns to remove the Assad regime," says Mr [Kalev] Sepp, [senior lecturer at the US Naval Postgraduate School].

"You can send in special forces to train and organise the rebels. But it's impossible to do that clandestine. So then you have to have Americans on the ground - and they're being killed. Is that worth overthrowing the Assad regime for?"

So, if Assad just takes the beating like a good Arab, then maybe that's it.  If he gets uppity, Obama gonna open a can of whupass on him.  These people sound like a bunch of nine-year-olds ginning for a playground scuffle.
Posted by The Mound of Sound at 3:40 PM

US trainers are going to train in Jordan. Either it was Obama's endgame or he is been sucked in, but the US is now on for regime change in Syria, long live PNAC.

I suspect Obama would prefer a corps of well-trained, well-equipped and well-led moderates capable of taking over if Assad is toppled and able to take down the Islamists in the aftermath.