This image, published in the Sydney Morning Herald, is said to show an exodus of Syrian Kurds, escaping the brutal civil war to take refuge in the autonomous Kurdish territory in Iraq. 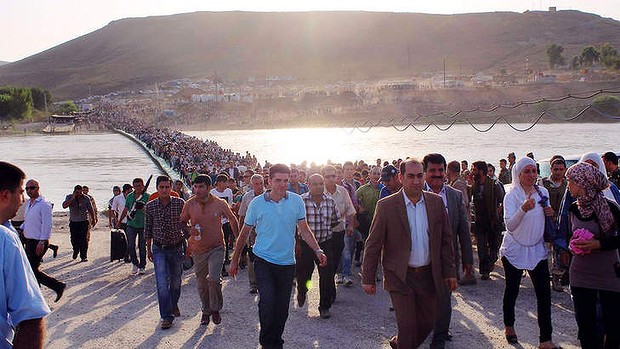 Is it real?  I'm not sure.  There's one fellow with a small travel bag but none of the others seem to be carrying even backpacks.  Usually refugees don't leave their most valuable items behind and they usually wear as much clothing as possible.  Also missing from this image is any sign of the usual family groups we associate with fleeing refugees - the kids, the parents, somebody helping grandma.  It seems to me that these are folks who aren't planning to be gone for long.

Massoud Barzani, the president of Iraq's semi-autonomous Kurdish area, which shares a border with north-east Syria, threatened to intervene if Kurds came under further attack.
Mr Barzani, whose own well-armed forces fought for independence against Saddam Hussein, said that if Kurds were "under threat of death and terrorism" then Iraqi Kurdistan would be "prepared to defend them".

An estimated 154,000 Syrian refugees are already registered in Iraq. The latest influx appears to have been caused by the building of a new pontoon bridge over the Tigris.

"UN refugee agency staff at Sahela report what appears like a river of people coming towards the border," said Claire Bourgeois, the UNHCR's Iraq representative, referring to a border crossing in north Iraq.

Leon Uris came to our house for dinner when I was seven. What he was doing in a house of atheists is unknown to me, but my vague recollection is of a nice guy I should have asked my father more questions before he died.

What makes me wonder is that as I understand it, the civil war has been largely leaving the Kurds alone. The Syrian Kurds have been doing fairly well out of all this; they've been running their own areas but not going after Assad's government, and the government has in turn been leaving them alone because it has its hands full with the rebels that are actually attacking it.

So unless the rebels attacked them, they should have no need to run anywhere. This would be a stupid move on the rebels' part, but possible since many of them seem to be sectarian fanatics and I understand the Kurds' Islam is slightly nonstandard. If that's the case though, it would be another of those things where the propaganda message is the exact opposite of the real situation, kind of like with the "Assad used chemical weapons--oops it was the rebels, never mind that's all right then" debacle.