A Gentle Predator But It Still Has Fangs 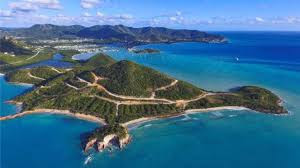 China loves islands. It loves them so much it has manufactured its own from mere atolls to dominate the South China Sea, roiling the neighbours and drawing American navy task forces to challenge for right of free passage.

Now China has a new island in its sights. In the Caribbean. It's Antigua.

Plans to construct a sprawling “Chinese colony” complete with factories, homes and holiday resorts across a pristine marine reserve in Antigua have ignited a storm of controversy on the Caribbean island.

Known locally as the Yida project after its main investor, Yida Zhang, the scheme includes plans for a manufacturing hub which promises several hundred jobs and increased exports.

A land grab that will transform the island paradise.


What sets the Yida project apart – in addition to its sheer size, which spans more than 2,000 acres – is that Chinese investors have been given a license to establish their own special economic zone for the new community’s residents and businesses who will benefit from tax waivers.

Under an agreement signed in 2015, developers are entitled to set up a seafood harvesting company within the zone and net 90% of the profits. The zone is also free of all taxes levied elsewhere in the country, including income tax, sales tax and import and export duties. Anyone investing more than $400,000 will be eligible for Antiguan citizenship.

Investors bought the land for $68m from the liquidators for the disgraced Texas financier Allen Stanford, once Antigua’s biggest employer, now serving a 110-year prison sentence in the US for running a global Ponzi scheme.

The deal with main shareholder Yida Zhang was struck in 2014 shortly after the prime minister, Gaston Browne, took office, declaring his intention to transform the twin island nation of 100,000 people into an “economic powerhouse”.

The development encroaches on coastal land and several tiny unspoilt islands that fall within Antigua’s largest marine reserve, protected by law since 2005. Its mangroves have long been a haven for migrating birds and a draw for tourists who flock to experience the untouched beauty.

The area is also a nesting ground for critically endangered sea turtles, the threatened West Indian whistling duck and the Antiguan racer, once dubbed the world’s rarest snake, brought back from the brink of extinction by efforts from local environmentalists.

“If it can happen in a marine protected area, where else can it happen?”

Some have predicted that China's island fetish may eventually materialize in the form of man-made islands in the Arctic Ocean from which China may advance claims on the supposedly resource-rich sea bed.

All other aspects of this issue and related themes notwithstanding, the key to successes of China had been hard work & toiling of its citizens.
This is in sharp contrast to the dominance of USA by military and financial (use of a fiat dollar) means.

"the key to successes of China had been hard work & toiling of its citizens". You must be mad. It's all about repression, greed and power to control. Once Chinese"tourists" set their anchor in the sand they will ruin the place and infect the entire Caribbean. Ask the people of Hong Kong if they can be trusted.

Heh in about 70 years Vancouver island will be a Chinese colony Moundy. Oh well, if our population is so docile they deserve to be conquered.

Ask Australians about the Chinese too..

Also ask them about Huawei as well...

A good book to read ....Silent Invasion (2018) is a book by Clive Hamilton and is about the growing influence of the Communist Party of China in Australian politics and civil society. The book details the systematic attempt by the government of the People's Republic of China to expand its espionage network and influence in Australia including Huawei..He even mentions Canada in his book. Anyong