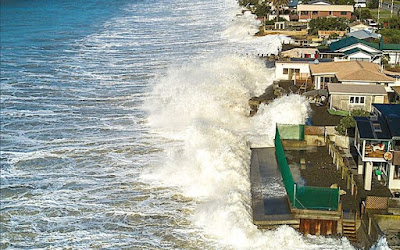 It's just a matter of time. As I go around my environs I spot places that will not be around much longer. These are usually waterfront homes that are periodically inundated by spring run-off or storm surges or king tides or any combination of the three. With each additional centimetre of sea level rise they become increasingly less viable.

There are already areas for which the municipality will no longer issue building permits, not even for a garden shed.  How do you sell that house? You don't, especially to anyone thinking about mortgage financing. You can't get insurance, you can't get a mortgage loan.

Reuters has a piece on the mental stress experienced  in American coastal towns as the residents confront surging climate threats.


As seas steadily swallow coastal land around the world, hundreds of experts gathered this week in New York for a first-of-its-kind global gathering on climate migration linked to land loss.

At the top of the agenda was a tough question: How soon will people want to move on when their homes and communities are at huge risk but not yet gone?

"Sometimes when talking to communities about retreat ... what they really, really want is for everything to be the way it was two decades ago," said A.R. Siders, an environmental fellow at the Harvard University Center for the Environment.


Dealing with worsening land losses can take a massive toll on communities who are preparing to uproot themselves as their homes vanish under their feet, said Robin Bronen, who heads the Alaska Institute for Justice.

The group has been working with 15 remote coastal Alaskan communities facing imminent climate-related threats, she said at the gathering at Columbia University.

"There's an enormous amount of grief from leaving these places," she said.

But "we have not turned adaptation (to climate change) into a trauma-informed field", Moser said.

And it is not just those who will be forced to relocate who will suffer mentally, Moser said.

The new and growing category of professionals whose work involves planning for and dealing with worsening natural disasters as a result of climate change will face their own trauma, she said.

About 80% of Americans who assist climate-vulnerable coastal and urban communities in dealing with growing threats say they have experienced burnout in their work, according to preliminary results of an ongoing survey by Moser and her colleagues.