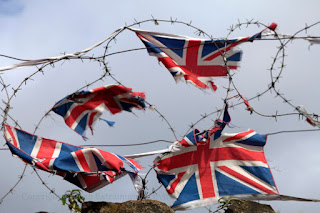 Today's Guardian editorial contends that the United Kingdom may not survive Brexit but neither might the Conservative party.  The editorial board singles out first-past-the-post for Britain's looming political quagmire.

The threat by a Conservative minister to bring down the government of the next party leader if he attempts to leave the European Union without a deal shows how the Brexit virus, having hijacked the Tory machine, could end up shutting it down. It would be wrong to regard such warnings as a bluff. When push comes to shove, such MPs are likely to be in no mood for compromise. This attitude will have been hardened if Boris Johnson becomes party leader despite his obvious flaws – especially since Brexit has radicalised Conservative members so much that they would rather break up the United Kingdom than not leave the EU. Depressingly the no-deal option is openly flirted with by both leadership candidates, shamelessly proffered to Tory members in exchange for their votes.

It is important to remember that even with the DUP’s support, a few Tory rebels can bring down a wayward government by leaving it. What also seems clear is that the new Conservative leader will not have a majority for either his central policy or for his government.

...The battle for the soul of the party, between rationalists and ideologues, could quickly become one that splits the Tories so badly that they end up out of power for decades. Even if the party stays together there is another existential threat: the electoral system. Having benefited from first past the post for decades, the Tories could become its victim. The reason is that under current arrangements once a party falls below a certain level of support, which is about 25%, the number of seats it wins collapses. With Mr Farage and Brexit rumbling on, the country could very well have four parties that can muster that share of the vote. Both Labour and the Tories risk voters defecting to the Brexit party and the Liberal Democrats. The result of any election could be chaos. It should be noted that British democracy has never been specifically associated with just one way of voting. First past the post in single-member constituencies was not the original system, nor one that many reformers had sought. It was a postwar creation that ought to be reconsidered in the light of the debacle of Brexit.